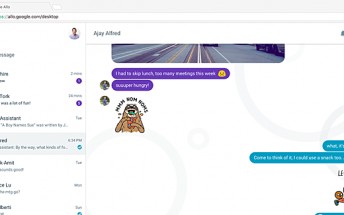 Google has confirmed that Allo for Web will be released soon. The confirmation came in the form of a tweet from Amit Fulay, who is Head of Product (Allo and Duo) at Google. Specifically, he said the application will be made available in a “few more weeks.”

And Google Allo. When will the web version be released?

On it … few more weeks

Back in February this year, Google’s Nick Fox tweeted a sneak peak of the web-based client, saying that it’s in early development phase. He, however, didn’t provide any specific launch time-frame. But now it’s reasonable to assume that the application will be released sooner than later.