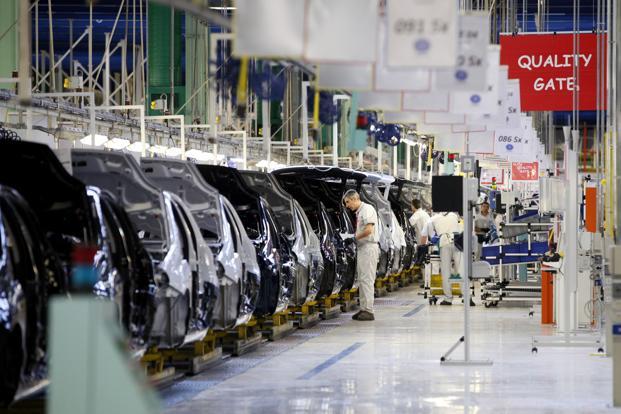 Companies across the developing world are stepping up investment to meet rising demand from industrial economies in what’s shaping up as a further spur to already buoyant global growth.

Big industrial economies including the US and Japan led the recent recovery in capital expenditure. Now, such investment is broadening to emerging countries with Morgan Stanley’s tracker of economies not including China now at its highest level since 2011.

“It is going from synchronized growth to synchronized capex,” said Chetan Ahya, co-head of global economics at Morgan Stanley in Hong Kong.

Executives are racing to keep up with demand by pouring money into research and new plants. While that spending gives another sugar hit to the global economy, the effects should be longer lasting too as productivity is boosted and pay checks fattened.

Much of the capex recovery can be chalked up to the booming production of smartphones and electric vehicles. A wave of upgrades by the likes of Apple Inc. and Samsung Electronics Co. is spurring demand in the semiconductor industry, where global capex is estimated to grow nearly 30% in the next 12 months, according to Bloomberg Intelligence. That’s a boon for Asia’s tech focused exporters like Japan, South Korea and Taiwan.

Win Semiconductors in Taiwan, which makes laser components for the iPhone X’s Face ID function, plans to increase capex to NT$7 billion ($239 million) this year from NT$4 billion in 2017. Austria based AMS AG, which produces optical sensors for mobile phones and supplies both Apple and Samsung, saw its capex surge to €582 million ($714 million) in 2017 from €91.7 million a year earlier, mostly due to expansion in Singapore, the company said in a statement. It estimates additional spending of $600 million this year.

Rising commodity prices, higher fiscal spending and improving domestic demand are boosting corporate spending elsewhere in Asia too. Indonesia, the Philippines and India will be among beneficiaries in both the short and medium term, according to Trinh Nguyen, a senior economist at Natixis SA in Hong Kong.

Around 69% of Asian companies increased capex last year, compared to 48% in 2016, according to Joao Cesar, senior investment analyst at Mirae Asset Global Investments.

Automakers in Europe, Japan, and China are expected to raise capital expenditure by 40%, 23% and 21% in the next 12 months, according to Bloomberg Intelligence. Volkswagen AG will spend more than 34 billion euros over the next five years to develop automotive technology for an era of electric robo-taxis.

To be sure, it’s not all blue skies. Tensions between the US and key trading partners continue to linger and not all parts of the globe are sharing the capex recovery. In Latin America, a region still reeling from a recession in Brazil and volatility in Mexico amidst protracted negotiations to revamp the North America Free Trade Agreement, investment has yet to show a strong rebound.

Capital expenditure by Latin America’s twenty largest companies dropped 21% to $51.8 billion in 2016, when compared to the previous year, according to Bloomberg data. The slowdown continued in 2017, with Brazil’s Petrobras SA alone—traditionally the region’s largest corporate spender—accounting for a $7.5 billion cut in capital expenditures.

“Investment in the core Latin America economies has not been a pretty picture,” said Michael Moran, who heads Americas economic research at Standard Chartered Plc in New York.

Still, the start of 2018 has been more promising. Companies such as Mexico’s telecommunications giant America Movil SAB announced last week it plans $8 billion in capital expenditures this year, a $500 million increase from 2017. Moran said the combination of higher commodity prices and lower domestic borrowing costs in some of the region’s largest economies is bound to boost corporate investment.

“Pent up demand around the world is not going to be exhausted soon,” said Jay Bryson, global economist at Wells Fargo Securities LLC, in Charlotte, North Carolina. “Even as global interest rates start to rise, they will not go up fast enough this year to choke up investment. This rebound in capex is fairly sustained.”