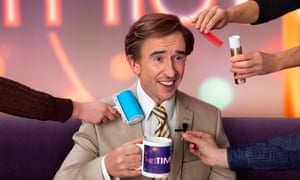 ‘There was a lot of promise’

I thought, while it was not a ‘five star’ episode at all (I realise we are all happy Mr Partridge is back at the BBC, but enough with the hyperbole already), there was a lot of promise. And I’m sure there were things I missed that will reveal themselves on additional viewing. This seems like a more subtle Alan. Obviously, in the realms of normal people, he’s as subtle as Jeremy Clarkson. But, for Alan, he doesn’t seem to be as outrageous or as out of his depth as before. Again, it’s all relative. So we can still laugh at clunt/fluck etc. And I think it will be very interesting and funny seeing how odd he gets near the end. A solid four stars, methinks. retromoz

‘The script was too subtle to raise belly laughs’

It had all the makings of a great return to form. The TV magazine format was well judged; Susannah Fielding was brilliant as the co-presenter and each ‘story’ was perfect satire material. But for me, the script was too subtle to raise belly laughs; more like embarrassed winces. The best bit was the exposure of Partridge’s anxieties about status, money etc, by the hacktivist’s revelations during the interview. The show’s ending in the BBC lift didn’t work. Perhaps the sharper and funnier W1A had raised my expectations of a BBC-based satire? Liz, 60, Leeds

‘It’s unfair to expect the heights of “vintage” Partridge’

As a Partridge fan of many, many years who can probably still quote far too much of the really obscure stuff, like when he was on the radio doing KMKYWAP (smelling salts anyone?) I really enjoyed it. Sure – it wasn’t as good as ‘vintage’ Partridge – character high point for me, Jed Maxwell – but it’s unfair to expect those heights every time. jimstinks

‘Too clean and realistic’

The writing is too undisciplined, like they wanted to jam every idea they thought of in there, even getting sidekick Simon involved when it wasn’t needed, instead of having a few well written jokes. The main problem is that old Partridge was surreal thanks to Armando Iannucci and Peter Baynham, and the directing style matches the tone. The new stuff is too clean and realistic in its presentation, so when something unrealistic happens it just feels awkward and out of place. Brained

‘It was a brilliant first programme. I look forward to more’

The original Partridge fans are in their 40s and 50s now and, like most old people, they find change difficult (I’m in that age bracket but I’m not scared of change). There’s people pulling the script apart, saying x or y wouldn’t happen in a TV studio. WTF are these people on? Alan shot dead a guest in Knowing Me Knowing You and carried on broadcasting – it’s never been about recreating a real-life scenario. It’s comedy not a documentary.

Then you have the people moaning about how Coogan is playing the character all wrong. His era has gone. He was briefly a big cheese with his own show, he was still deluded when he was at the hotel. He now realises he’s well out of it but he has a chance. Of course he’s not going to wear a big-shouldered green blazer and have his hair parted with glue like before. Times have also changed.

It was a brilliant first programme and it was great it didn’t copy any of the previous formats. Lynn had some brilliant lines and it’s hilarious when her jealousy shows through. I look forward to more. barrycalms

Not a five-star show. It fails to have the wonderful set pieces and guests that Knowing Me Knowing You had. The segments of presenter chat felt hollow and vacant. The dodgy technology errors like the failing Twitter feeds etc felt dated and tedious. I got the impression Steve Coogan thinks this is funnier than it is. tjhvaliants

‘I didn’t laugh once, which is rather spectacular’

I thought Knowing Me Knowing You was almost always hilarious. I’m Alan Partridge is probably one of my favourite sitcoms of all time. But this was barely one star, at best.

I didn’t laugh once, which is rather spectacular. Not even a slight smile. There was no bite or edge to the comedy; there wasn’t much comedy at all. The jokes were very safe. It seemed to steer away from all controversy and danger. Especially when you compare it to similar parody stuff like Brass Eye and Charlie Brooker’s Screenwipe (and others), it just wasn’t in the least bit funny.

I’m really not sure what it was going for. I’d rather have simply watched The One Show (and I really don’t like The One Show). Was the whole thing about how Steve Coogan is even more desperate for the pay cheque than Alan is? I wouldn’t have thought so. Definitely one to skip next week. pretentiouspenguin

I imagine this’ll grow nicely, especially the likely ever more tense and resentful relationship he’ll have with the co-presenter. It’ll be interesting to see where they let Alan completely lose the plot (for he must), or where his ego runs amok prior to his fall. He’ll no doubt get more desperate to cling on to his return. I can see an attempt to sabotage the original host’s return being somehow revealed. Maybe not vintage Alan quite yet, but I think it sets it up nicely for a gradual ratcheting up towards his inevitable self-combustion. And thank God it’s not Mrs Brown’s Boys, of course. RicardoRed99

‘Good to have some genuine talent back at the BBC’

One of the most remarkable things to witness is Steve Coogan’s complete capture of Alan; how he inhabits every nervous tic, desperate look or awkward move. He’s always been a very physical performer, as well as having exquisite comic timing and a real command of vocal delivery. The brief demonstration of how to go to the toilet on a train without using your hands was great. Right up there with his running up the hill in the Kate Bush medley, or working out how he can use two mini soaps in the shower. Good to have some genuine talent back at the BBC. dylan37

‘The opening 15 minutes were some of the weakest’

Started a little bit slowly for me; but really found its feet after Tim Key’s interactive screen struggle. No-hands hygiene and the hacktivist were solid, and hopefully it can build from that now it’s all established. Not sure it warrants the five star review, mind. I’ve very recently gone through the entire Partridge backlog and the opening 15 minutes were some of the weakest. CaldersInBrum

‘I think it’s over for Alan’

It didn’t work for me. He was just too out of step with current TV values. I don’t see how he could have got past a rehearsal. It would have been more convincing if he could have learned just a little bit more of how to survive in 2019. He and Lynn seemed to have stepped out of a time machine without doing any research whatsoever. Hope it improves, but if not, I think it’s over for Alan. Quackersyard