Home  »  World Economy   »   Copper, a barometer for the global economy, drops to a 2-year low on trade war fears

Copper futures fell to a two-year low on Monday, as investors fear what a full blown trade war between the U.S. and China will do to the global economy. 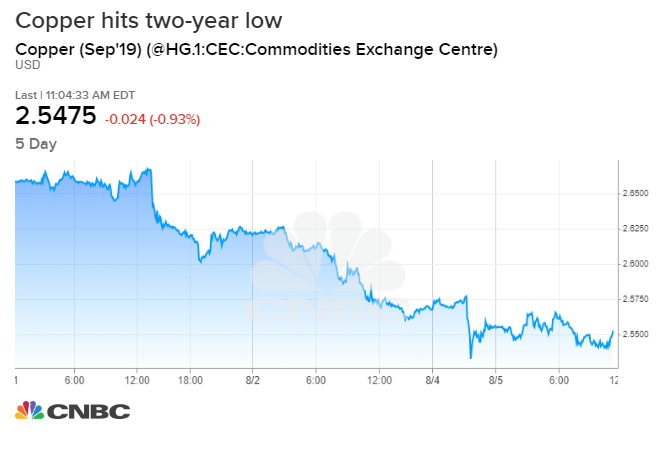 “The combination of a disappointing Fed and an escalating trade war appears to be too much for this fragile global economy. The summer breakdown in copper suggests that volatility will remain a major theme in the markets in H2′19, and the odds of a recession are steadily rising,” said The Steven Report’s Tom Essaye.

Worries about the trade war between the world’s two largest economies caused stock markets to tank on Monday. Last week, President Donald Trump added new tariff’s on Chinese goods and China retaliated on Monday by letting its currency weaken, crossing the 7 yuan per dollar threshold, and of reneging on a promise to resume imports of U.S. agricultural products.

Essaye said the breakdown in copper last week was “by far the most important development” and that “markets were clearly too optimistic given the multiple risks in the macro backdrop.”

Morgan Stanley said Monday that if the U.S.- China trade war escalates any further that a global recession could hit in just 3 quarters.

“What China represents is a major deflationary force, not only for world growth but for Dr. Copper and commodities in general,” said Marc Chandler, chief market strategist at Bannockburn Global Forex.

Bannockburn said if China stimulus can’t outweigh the trade war, there will be an oversupply of copper that the globe cant adsorb, therefore weighing on the metal’s price.

Copper is known as a barometer of economic health because of its use in homebuilding and commercial construction.

Meanwhile, gold was benefiting from the turmoil because it has fewer industrial applications and is more of a store of wealth than copper. Gold futures rose to a six-year high on Monday, as investors flocked to the save haven trade. Spot gold was up 2% at $1,469.6 per ounce. Silver, platinum and palladium also rose.