Home  »  Best Reviews   »   The Daughter-in-Law review – is this the best British working-class drama? 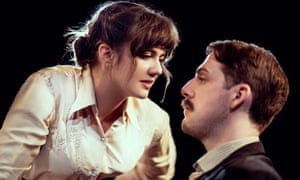 Three years ago, the National Theatre pointlessly conflated DH Lawrence’s three mining-community plays into a single evening. However this work, written in 1913, deserves to stand alone. It is arguably the best account of working-class life in British drama.

It would be easy to label the piece a classic Freudian drama about divided loyalties: as Minnie Gascoyne, married to the withdrawn Luther, resonantly asks “how is a woman to have a husband if all the men belong to their mothers?” But, seeing the play again, I was struck by Lawrence’s breadth of sympathy: like all good dramatists, he sees every character’s point of view. Minnie feels angrily excluded from both the emotional and working life of her miner husband. Luther resents his economic dependence on a wife who has her own private nest egg, while his mother views all men, whether sons or husbands, as a source of lifelong pain.

Lawrence not only explores the situation with remarkable even-handedness but sets it against the background of a strike in which the bosses use blacklegs and the military to keep the pits open.

There is a touch of melodrama in Luther’s impulsive destruction of the pictures his wife has purchased and the design might do more to bring out Minnie’s prettification of their miners’ cottage. Otherwise this is a first-rate revival of a major play.

Ellie Nunn invests Minnie with exactly the right social superiority and her goading of the obstinately taciturn Luther anticipates, with the sexual roles reversed, the marital battles in Look Back in Anger. Harry Hepple pins down precisely Luther’s sullen obduracy and built-in immaturity and Veronica Roberts is magnificently implacable as his domineering mother. Tessa Bell-Briggs as a hard-headed, working-class woman and Matthew Biddulph as Luther’s younger brother lend strong support and you emerge marvelling at Lawrence’s achievement in creating a play in which sex, class and industrial politics are effortlessly intertwined.