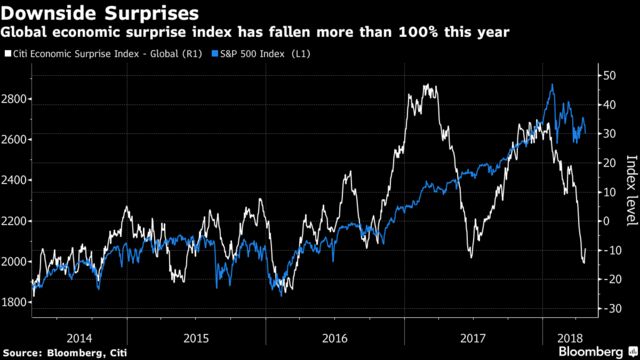 Treasury rates topped 3 percent for the first time in four years. For equity investors, the timing could’ve hardly been worse.

The rate milestone was never going to spark celebration on the stock market, as rising bond yields signal higher borrowing costs for consumers and companies and can send stock market investors scurrying to the bond market in search of returns. But it needn’t be all bad, especially if yields are increasing as economic growth is accelerating.

Enter Caterpillar Inc., 3M Co. and United Technologies Corp., stalwarts of American industry that serve as bellwethers for key pieces of the global economy. Caterpillar had its biggest decline since 2016, and 3M plunged the most in 12 years, with both warning that rising costs and tepid demand might hurt profits as the year goes on. Wall Street took the news as a warning that the worldwide economic expansion might be near its peak.

“It means economic growth might not be what the administration is saying, that the tax cuts will pay for themselves because you’ll have increased revenue from higher GDP,” said Donald Selkin, New York-based chief market strategist at Newbridge Securities Corp. Everyone “is talking about the great earnings for the first quarter, but frankly every stock that has reported has done lousy.”

Earnings were supposed to act as a sort of reprieve for equity bulls who’d been struggling to pronounce the correction over and dead. But with almost a quarter of companies done reporting, and almost 80 percent of that share surpassing profit expectations, the results haven’t been a saving grace for investors.

In fact, analysts have cut their earnings estimates for the next year, adding fuel to speculation that the first quarter may mark the height of profit growth.

The S&P 500 Index fell 1.3 percent to 2,634.52, its biggest decline in three weeks, as companies with revenues that are more reliant on economic growth led the decline. Industrial, materials and tech stocks dropped more than 2 percent, offsetting gains from high-dividend shares such as telecom and utilities. Reappearing geopolitical concernsalso weighed on equities after President Trump threatened Iran.

“It’s kind of like a paradox of sorts,” Ernie Cecilia, chief investment officer at Bryn Mawr Trust Co, said by phone. “You have strong earnings, in some areas not perfectly aligned on an expectational basis, but it’s relative to expectations. There’s an eye on interest rates, they’re not problematic but they are rising, and 3 percent is at least somewhat of a psychological level that gets peoples’ attention. And then you have the geopolitical issues.”

The stock market’s worry over future growth has persisted since companies started reporting their quarterly results two weeks ago. While profits have come in about 7 percent higher than analyst estimates, stocks have seen muted reactions, a sign that investors are skeptical that the performance can be repeated once the effect of tax cuts wears off.

Indeed, the message from some of the most economically sensitive businesses is alarming. Consider semiconductor companies, whose products are used in everything from mobile phones to autos to computers. Across the globe, chipmakers are announcing disappointing results, blaming weaker demand. That’s in turn hit Apple amid growing speculation the new iPhone isn’t selling as well as had been hoped. The latest clues on how pervasive the slowdown in chip demand is will come later Tuesday when Texas Instruments Inc. reports results.

Other technology behemoths aren’t escaping the plunge either after Google’s parent Alphabet Inc. reported earnings that ratcheted up spending concerns. The news dragged down other tech darlings, wiping almost $85 million in market value from the FANG complex, which also includes Facebook, Amazon and Netflix.

Comments from Caterpillar and United Technologies echoed the latest economic data showing that the concerted global rebound behind last year’s equity rally may be starting to lose momentum.

German business confidence plunged the most in almost a year and sentiment deteriorated in Italy and France, keeping the euro region on an uncertain footing after a weak first quarter. In Asia, China’s leaders are giving their strongest signal since 2015 that growth in the world’s second-largest economy could slow.

In the U.S., government data due Friday is expected to show the economic expansion decelerated to an annual pace of 2 percent in the first quarter from 2.9 percent in the previous period. Still, investors are waiting to assess an impending boost to growth from the tax overhaul signed in December.

“It’s hard for us to call Q1 a high-water mark when tax cuts are kicking in,” said Michael Block, head of trading at Rhino Trading LLC. “We also acknowledge that the uncertainty on the Fed (we have a more dovish view than consensus), the prospect of at least the announcement of new stimulus measures as we roll into mid-terms, and other exogenous factors globally means that nothing is written in stone on the cycle. ”