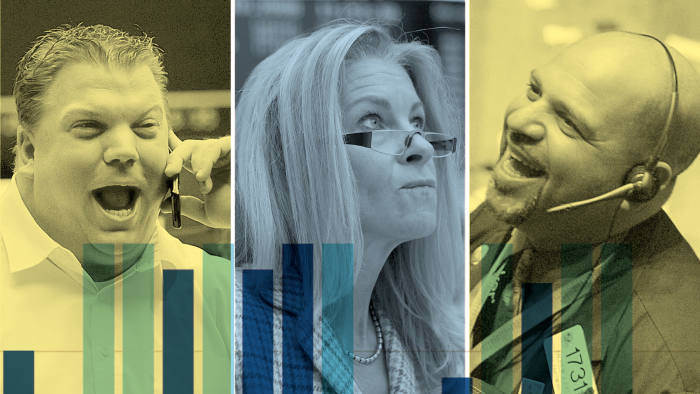 After so many years of anaemic growth and low wages, it might seem unreasonable to suggest that the next economic downswing could be lurking just around the corner. It is true that unemployment rates have dropped dramatically and wages have picked up a touch in a number of countries, and both are useful “end-of-cycle” indicators.

On the other hand, interest rates are mostly low, President Donald Trump is offering fiscal stimulus in the US, the eurozone is more dynamic than it has been in many years and earlier fears regarding a Chinese economic meltdown now look absurd.

Why, then, worry about the next downswing? Simply put, alarm bells should start ringing precisely when so many countries are performing so well simultaneously.

Starting with the 1994 bond market crash, through to the 1997 Asian crisis, and from the 2000 Nasdaq collapse through to the 2008 global financial crisis, history shows that periods when many countries are simultaneously growing above their long-run trends are associated with financial and economic upheavals. The only exception to this rule is the aftermath of recessions, most obviously in 2004 (following the dotcom bubble and 9/11) and in 2010 (after the global financial crisis).

Synchronised growth creates an “adding up” problem. What might be possible for one country to achieve economically when others are relatively weak may become more difficult to sustain when others are stronger. This might seem counter-intuitive — after all, export prospects are better when others are doing well — but the evidence suggests that economists and policymakers too often fail to recognise the three main “costs” of global economic success.

The first, more widely recognised since the financial crisis, is excessive risk taking. Put simply, the good times don’t tend to last because we collectively start to do stupid things that bring them to an end. Until the equity market wobbles in early February, most investors appeared to be as complacent about potential risk as they had been ahead of the global financial crisis.

The second cost is simple: as the world economy strengthens, so does demand for commodities and capital. That brings unpleasant side effects, such as rising oil prices and higher bond yields.

The third is an inevitable consequence of the first and second. Periods of synchronised growth tend to be associated with unexpectedly rapid monetary tightening. Since the 1994 bond market collapse, the US Federal Reserve has boosted interest rates faster than economists or investors expected in only seven years. Those seven episodes correspond almost perfectly with periods of synchronised global growth. 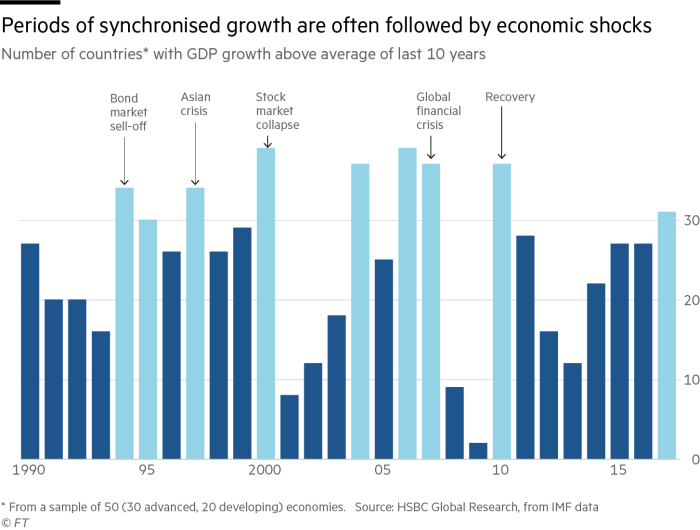 These costs can create localised or global financial and economic shocks. In the 1997 crisis, Asia’s woes proved to be an unexpected boon for the US. Capital was repatriated (driving US long-term interest rates lower and boosting domestic demand) and commodity prices fell (pushing inflation down). But when the costs are global there is no easy escape: the 2008 financial crisis was as much a challenge for Norwegian pension funds as it was for owners of subprime real estate in Florida.

Today, inflation is mostly well-behaved. The same cannot so easily be said about asset prices. Judged by burgeoning demand for emerging market debt, booming housing markets and, on some metrics, blistering US equity market valuations, it may be that risk-loving behaviour has returned.

Debt levels are higher than they were before the financial crisis. And, should things go wrong, interest rates are already so low that most central banks cannot ride to the rescue with sizeable rate cuts, as former Fed chairman Alan Greenspan did whenever the US economy wobbled.

How should policymakers respond? The Bank for International Settlements has long argued that it is difficult for central bankers simultaneously to achieve both price and financial stability. There is a case for pursuing what I call “positive ambiguity”. It may be better to downplay the goal of price stability in order to deflate a financial bubble.

Central bankers should also be on the lookout for foreign “feedback loops” and co-ordinate their policies accordingly. To date, overseas influence has often been ignored.

Meanwhile, politicians should try to avoid the late cycle hubris — often accompanied by slack fiscal policy — that typically emerges when global growth is firing on all cylinders. Too many nations have ended up on the economic rocks in pursuit of a “new economy” dream. In the current climate, however, that is easier said than done.

The writer is HSBC’s senior economic adviser and author of “Grave New World: The End of Globalisation, the Return of History”