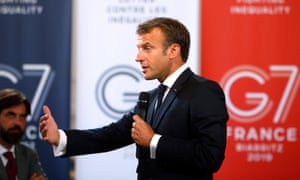 Rarely has there been more need of collective action on the world’s problems than at the G7 summit hosted by Emmanuel Macron in Biarritz this weekend. Rarely have the chances of success appeared so miserably low. The G7 is supposed to be the forum where the west’s leading nations get to grips with thorny economic and political issues, and even though life has moved on since a previous French president, Valéry Giscard d’Estaing, hosted the first get-together at Rambouillet in 1975, there is plenty to talk about. Three subjects scream out for attention: protectionism, Brexit and the climate emergency.

As in the mid-1970s, the global economy is not in good shape. Growth is slowing and there is a hint of recession in the air. In two G7 members – Germany and the UK – output is falling; in a third, Italy, it is stagnant. Around the world, factories are operating at much less than full capacity.

The drift towards protectionism is not the only reason for this weakness. Over the last decade it has become clear that the recovery from the deep slump of 2008-09 was incomplete and overreliant on the build-up of corporate and consumer debt made possible by a prolonged period of ultra-low interest rates and central-bank money creation. But the tit-for-tat tariff wars launched by Donald Trump 18 months ago certainly haven’t helped to improve business confidence or encourage firms to invest.

Mr Giscard’s original conception for the summit was that it would be an informal chat where leaders could talk privately and openly about matters of mutual concern. Given that the G7 includes the four biggest European Union economies and that the scheduled day for Brexit is little more than two months away, it might be thought that the opportunity would be taken to discuss minimising the economic damage to all concerned. That opportunity will be spurned.

Finally, there’s the climate emergency. Mr Macron wants the meeting to discuss ways of protecting the Amazon rainforest – and he is right to want it on the agenda. But for meaningful action he will need buy-in from Mr Trump, and he is not going to get it from the world’s most powerful climate science denier.

It wouldn’t be hard to come up with a punchier version of the pre-cooked and platitudinous communique the summiteers will put their names to. On Brexit, the G7 can’t actually do much more than provide some mood music, although some soothing noises would not go amiss. But it could certainly act elsewhere. For the economy, there could be a global growth compact that would include a commitment by Germany to run down its colossal current account surplus in return for Mr Trump abandoning protectionism. The G7 lacks the power to direct central banks to cut interest rates, but could agree to a coordinated boost to growth through fiscal policy: lower taxes and higher public spending.

On climate change, G7 members would commit not just to meet the promises made at the 2015 Paris conference but to go further by pledging cash to help poorer countries make the transition to low-carbon economies. But it is naive to imagine any of this will happen. Mr Trump has made it clear that he would rather not be in Biarritz and, in truth, he would have been better off staying at home for the weekend to play golf. On the global economy and climate change he represents the problem rather than the solution, and he is not making Brexit any easier or less likely either. For the G7 to function it needs US leadership and commitment. It is getting neither.

As the crisis escalates…

… in our natural world, we refuse to turn away from the climate catastrophe and species extinction. For The Guardian, reporting on the environment is a priority. We give reporting on climate, nature and pollution the prominence it deserves, stories which often go unreported by others in the media. At this pivotal time for our species and our planet, we are determined to inform readers about threats, consequences and solutions based on scientific facts, not political prejudice or business interests.

More people are reading and supporting The Guardian’s independent, investigative journalism than ever before. And unlike many news organisations, we have chosen an approach that allows us to keep our journalism accessible to all, regardless of where they live or what they can afford. But we need your ongoing support to keep working as we do.

The Guardian will engage with the most critical issues of our time – from the escalating climate catastrophe to widespread inequality to the influence of big tech on our lives. At a time when factual information is a necessity, we believe that each of us, around the world, deserves access to accurate reporting with integrity at its heart.

Our editorial independence means we set our own agenda and voice our own opinions. Guardian journalism is free from commercial and political bias and not influenced by billionaire owners or shareholders. This means we can give a voice to those less heard, explore where others turn away, and rigorously challenge those in power.

We need your support to keep delivering quality journalism, to maintain our openness and to protect our precious independence. Every reader contribution, big or small, is so valuable.