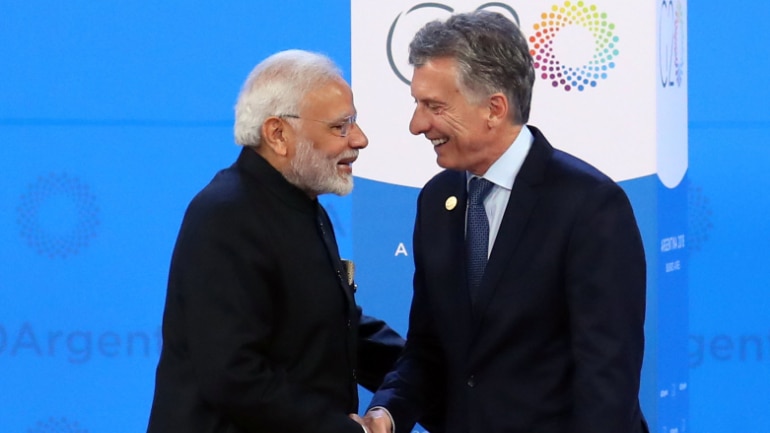 For the first time, India will host the annual G20 summit in 2022, coinciding with the country’s 75th anniversary of Independence.

Prime minister Narendra Modi made the announcement at the closing ceremony of the 13th G20 summit in Buenos Aires on December 1, 2018.

He thanked Italy for allowing India to play the host as previously, Italy was to host the international forum of the world’s top 20 economies in 2022.

Pointers by PM Modi at the G20 summit

1
Prime minister Narendra Modi stressed cooperation among G20 countries on issues related to the global economy, trade tensions, crude oil prices, terrorism, and fugitive economic offenders.
2
He highlighted the current challenges which the global economy face, the threat of increasing financial vulnerabilities mainly arising from the monetary policies of advanced economies and oil price volatility.
3
The prime minister talked about the escalating trade tensions and the collateral damage it causes to the least developed countries and other emerging economies, referring mainly to the ongoing US-China trade war.
4
Modi highlighted and stressed the price stability of crude oil because any instability in crude prices causes a lot of pressure, especially on domestic economies to adapt their economic policies because of price fluctuations.
5
Another important point which Modi highlighted was the need for carrying out reforms in the World Trade Organisation (WTO).
6
He stressed that reforming the WTO is very necessary to carry forward the dialogue on trade, in services and promoting the global value chain in the agricultural sector.
7
PM Modi also stressed that it is time to fully implement and operationalise the various aspects of the 11-point agenda against terrorism which was issued last year as a part of the Hamburg Declaration.
8
He advocated strengthening of the United Nations’ counter-terrorism network and urged the BRICS and G20 nations to work unitedly towards that goal.
[“source=indiatoday]
Tweet Pin It