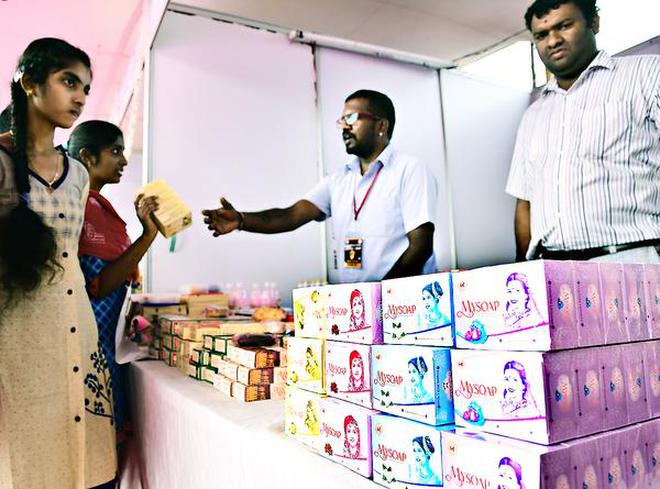 The good old sense of smell is what’s driving the century-old Karnataka Soaps and Detergents Ltd. (KSDL) today. Known for its signature, premium Mysore Sandal Soap, the firm is reinventing itself by offering an affordable range of soaps in various ‘fusion’ scents.

The scents were selected following a nationwide market research exercise. “Our research revealed that some regions had cultural significance attached to scents and in other cases, the perfumes were popular in these regions. We shortlisted five scents from five regions of the country to launch our popular soaps,” said Harikumar Jha, managing director, KSDL .

For instance, their market research revealed that jasmine perfume was popular in south India, especially in Kerala and Tamil Nadu. In western India it’s rose, while the north Indian market prefers lime and fruity flora. Orange was the popular choice in Maharashtra and lavender in Orissa and Bengal, said Mr. Jha.

According to sources, scents that did not make the cut were walnut, lily and aloe vera.

And, for the first time, the Public Sector Unit (PSU) entered the popular soaps segment launching five soaps for as low as ₹20, for a bar of 100 gm, this week. However, the new soaps are not of the signature sandal scent. The lowest price for a sandal soap (75 gm) is around ₹35 a piece.

Mr. Jha said that while one of the complaints against them was that they were restricted to premium soaps, being a PSU, they had the moral responsibility to cater to lower income groups as well. “Nearly 70% of society cannot afford premium soaps. This prompted us to enter the popular soaps segment,” he said.

The exorbitant costs of sandalwood and its shrinking cultivation has also led the company to reinvent itself with other scents, over the past few years. It has been experimenting with a range of hand and body wash in rose and pineapple scents, over the last one year. This has received a good response, encouraging the company to explore new scents, a senior official said.

“A tonne of sandalwood costs ₹1.3 crore and a litre of sandal oil ₹3.6 lakh, which does not make it viable for the popular soaps segment,” the official said. KSDL had a turnover of ₹521 crore in 2016-17 making a profit of ₹54 crore and has estimated the turnover this fiscal to be ₹560 crore.

“The major chunk of turnover still comes from our signature sandal products itself, to the extent that it makes up for nearly ₹500 crore of our business. But, the new scent products are slowly picking up and we hope to cross ₹600 crore mark this year,” a senior official said.