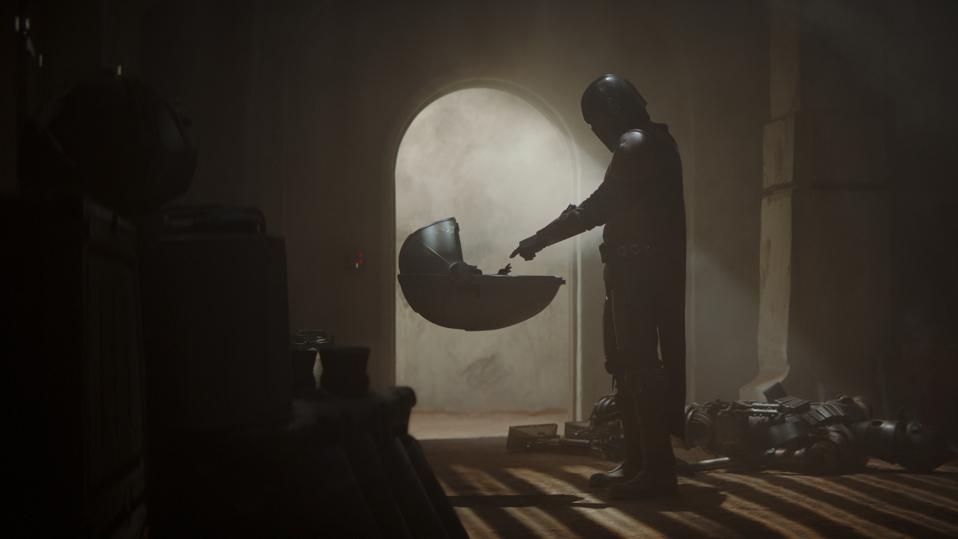 I’m a big fan of the new Star Wars trilogy, and of the two new stand-alone films—Rogue One and Solo—but my favorite new Star Wars since The Return of the Jedi isn’t something you’ll see in theaters.

The Mandalorian, Disney’s new live-action Star Wars TV show, debuted with the release of Disney+, the company’s new (and still pretty bad) streaming service. Its eight relatively short episodes mean that the total runtime for the first season is about two movies or so long.

This means that our helmeted protagonist, Mando, gets more screen-time than most Star Wars characters, and certainly more than Boba Fett—the bounty hunter that inspired all of this. And it’s just terrific.

The story takes place after The Return of the Jedi and the fall of the Empire, but still long before The Force Awakens and the rise of the First Order.

We’re in the no-man’s land between the two trilogies, once filled with Extended Universe books and lore, now left hollowed out after Disney acquired LucasFilm. Interestingly, The Mandalorian ties into the animated Clone Wars TV show in some big and surprising ways.

Not Another Student Loan Piece

Managing Wealth In An Uncertain World

Amazon Cyber Monday: The Best Sales That Are Still Available On Tech, Home, Clothing And More

It also does an incredible job at capturing that special something that made the original trilogy so great. I think J.J. Abrams also does this, to some extent, in the new trilogy, but Jon Favreau and Dave Filoni do it better here, despite the lack of Skywalkers and Jedi—or perhaps because of it. They’re not working with a clean slate, exactly, but they’re able to tread new ground while still tipping their hats to what makes Star Wars feel like Star Wars.

Sometimes it’s in the nitty gritty, the small details that compose each scene, or the little references and in-jokes. We see Kowakian monkey-lizards on the planet Navarro, just like Jabba the Hutt’s pet, Salacious B. Crumb. One is being roasted on a spit while the other looks on, forlorn in its cage. No mad cackle here, not when you’re about to become someone’s dinner.

There are red-eyed Jawas, thuggish Twi’leks, and scout troopers who couldn’t hit a can with a blaster if they tried.

The remnants of the Empire are a disheveled bunch. Stormtroopers in dirty armor, slovenly and demoralized. There is almost no sign of the New Republic out here in the Outer Rim, the Wild West of a galaxy long, long ago and far, far away.

The Mandalorian is a Space Western for the most part. It’s a Sergio Leone homage, from the music to the motifs. It’s also an interesting blend of serial and procedural storytelling.

While there’s an overarching story that ties all the episodes together, about half of the first season unfolds more like a procedural drama, with self-contained adventures (or misadventures) playing out in each episode. It starts off as a serial, becomes a procedural, and then returns to the serial format for the final two episodes.

You don’t see this kind of thing very often these days. Most tent-pole dramas and even many comedies are serials these days which I’m largely okay with. I like big, elaborate stories that grow from episode to episode, season to season. But I like this show’s format, too.

It reminds me a bit of X-Files, actually. (Interestingly, The Witcher on Netflix does a similar thing since its first season is based on a book of short stories).

Indeed, the shifting format led to the season’s biggest backlash, as critics and fans found themselves wondering if the story would ever go anywhere, or if Mando would simply hop from one planet to the next, facing a new threat each week.

I actually really like the format, maybe because it reminds me so much of X-Files. In that show you’d have your Big Plot episodes all about the Cigarette Smoking Man and the conspiracy and the coverups and Mulder’s missing sister, but you’d also have your Monster Of The Week episodes, which were often my favorite.

What made it work so well was the fact that both formats were intertwined—unlike say, Law & Order, which is a procedural crime drama with no Big Story to tie it all together, or Game of Thrones which was strictly serial, with no Monster Of The Week episodes to give you a break from all that drama.

It’s a novel format and I’m glad the showrunners went that direction. It allowed us to visit cool new planets and revisit old ones, like Tatooine. And because this isn’t tied to the Skywalker Saga, we were able to see the universe from a wholly new perspective, and introduce cool new—and incredibly important—characters and revelations to the story of Star Wars more broadly.

I won’t spoil those for you. You can read my recap/reviews below for spoilers if you like. You’ve probably already been spoiled with regards to the series’ break-out star—a certain Child—and suffice to say that this character is perhaps the cutest, most adorable character on TV—period. For a show about a badass bounty hunter taking down all the roughest, meanest foes the galaxy can throw at him, this show sure is cute.

It’s actually a great juxtaposition—not quite a “buddy cop” story, but close enough. A bit like Logan, I suppose, with the rough-and-tumble Wolverine and his young ward, Laura.

The first season of The Mandalorian is an exciting, visually sumptuous adventure through the dirtier, less glorified corridors of the Star Wars universe. It captures the feel of Star Wars perfectly without ever having a lightsaber duel. And it leaves us with a galaxy full of opportunity for Season 2, with new planets to explore, new threats to face, and a new quest.

Beyond just the excellent storytelling and cinematography and special effects, the rest of the production is stellar. Pedro Pascal (and his stunt doubles) does an excellent job in the lead role as the titular Mandalorian.

He’s not one for words, and when he does speak it’s always a soft, Eastwood-esque growl. Not quite as growly as Henry Cavill’s Geralt in The Witcher, but in the same vein—the strong, silent type.

Mando is, if anything, less chatty. He also never takes off his helmet, so a great deal of emotion and reaction has to be conveyed without facial expressions. It’s quite remarkable.

The rest of the cast is also terrific. There are guest appearances (either in person or just as voices) from Nick Nolte, Taika Waititi (who also directs) and many others. Gina Carino as Cara Dune and Carl Weathers as Greef Karga are both fantastic in their respective roles. And Werner Herzog puts in an especially creepy performance as the mysterious Client.

The original score also deserves a great deal of praise. Composed by Black Panther composer Ludwig Göransson, I still have the theme song in my head. It captures both Star Wars and classic Western soundtracks perfectly. It’s so good that you never really need that famous Star Wars theme at all. It’s its very own thing, and works perfectly for the show.

I’m one of those rare Star Wars fans who likes the new trilogy as well as Rogue One and Solo. I like both The Last Jedi and The Rise Of Skywalker. I was thrilled when The Force Awakens came out. It’s funny, most Star Wars fans seem to like some of these but never all of them, but here I am—living proof that it’s possible!

I did not like the prequel movies, though there were bits and pieces of them that I enjoyed, and I think Ewan McGregor was perfect as Obi-Wan Kenobi and can’t wait for his show to come out on Disney+.

I still wish they’d remake the prequels entirely, however, though I know it won’t happen—and if they can’t release the original trilogy in its original format, I wish they’d change the “fixes” George Lucas made and put in modern CGI tweaks and practical effects instead of the super dated ones he added in one of the most absurd decisions a filmmaker has ever made. Truly, the changes to the OG trilogy are a disgrace.

But look at me now, getting all distracted. Going off on a tangent.

My point is that as a big fan of all the modern Star Wars films, I enjoyed The Mandalorian even more. More than Rogue One, more than the new Skywalker trilogy, more than Solo (which, by the way, is criminally underrated).

It’s a terrific show, and well worth a Disney+ subscription even if you cancel right after until Season 2 comes out (or some other show you want to stream). I’ve spoken with people who weren’t impressed, but all I can think is that they have terrible taste and useless opinions (just kidding . . . sort of). I loved just about every minute of the first season and I cannot wait—though I’m going to have to—for Season 2.

Not all episodes were as good and some were better than others—that’s just how it goes. I don’t expect to love every episode just as much. But there was such great variety from one to the next that I was always entertained.

Here’s a thing: I’ve watched each episode of this show more than once. Some I’ve watched four times. I’ve never done that (at least in short order like this) with any other show. I’ve rewatched shows but usually months or years later. Sometimes I’ll rewatch something because it’s a little confusing and I need to, but with this show I just want to. I could marathon the whole season again right now. That’s how much I love this show.