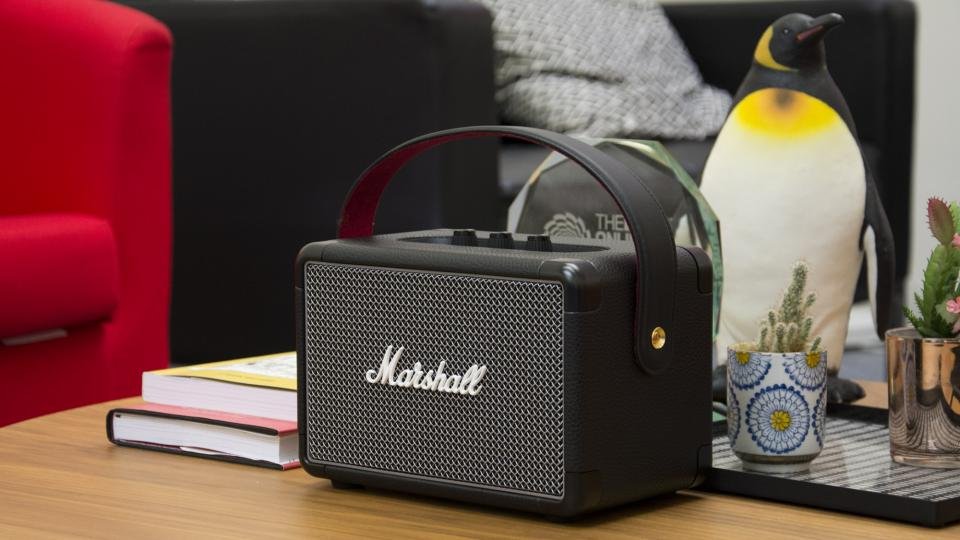 In 2015, Marshall showcased its new speaker to the world, the Kilburn. The company set out to create a Bluetooth speaker that mimicked its larger amplifiers, and the result was a mini amp that wouldn’t have looked out of place on a tiny tour bus. Fast-forward to 2018, and the company is back with a follow-up, the Kilburn II.

READ NEXT: Marshall Kilburn review: The kickass retro speaker that turns the style all the way up to 11

Marshall Kilburn II review: What you need to know

The Marshall Kilburn II is, in many ways, an improvement over the original Kilburn. The new speaker still has a swagger to it – it’s aesthetically beautiful and has a meaty sound.

But that’s where the similarities stop. The new speaker is louder and clearer, has a rear-firing speaker for room-filling sound, and uses Bluetooth 5.0 aptX for wireless CD-quality transmission. To add a cherry on the cake, it’s also IPX2-rated, meaning it’s resistant to dripping water. However, all these features come at a price: it’s dearer than its already-expensive predecessor.

READ NEXT: JBL Xtreme 2 review: The best Bluetooth speaker under £250

The Kilburn II costs £269, which is around £60-90 more expensive than the original Kilburn. At this price point, there are some seriously impressive Bluetooth speakers to compare it to: the party-rocking JBL Xtreme 2 at £240, the stylish Wi-Fi enabled Libratone Zipp at £172, and the most versatile smart speaker on the market, the Ultimate Ears Megablast at £180. 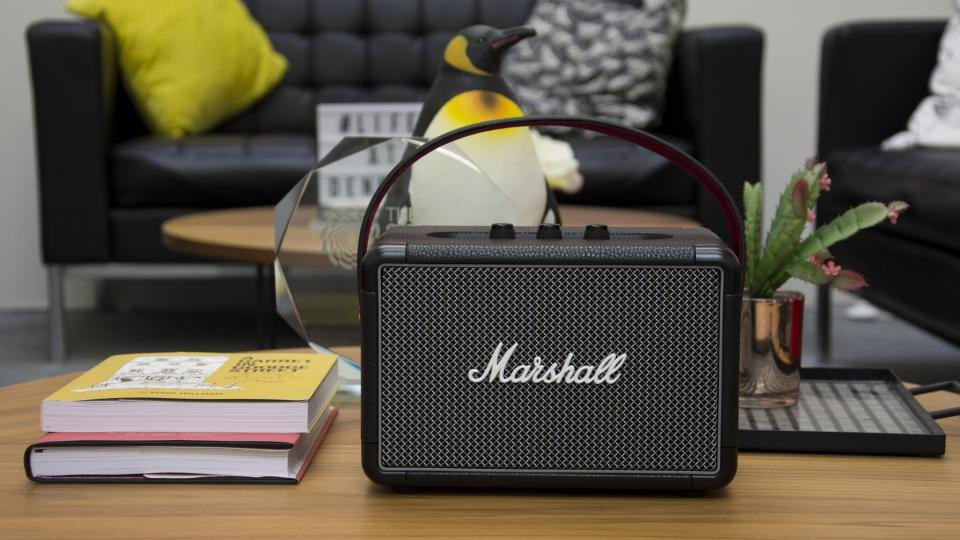 The Kilburn II takes after Marshall’s full-sized amplifiers, and in its small form looks beautiful. It has the same leather design, while its soft carrying strap has an all-red interior, which reminds me of an Italian tailor-made suit.

Marshall has, however, opted for a more subtle design this time around. Unlike its predecessor, the Kilburn II doesn’t have a gold coloured metal plate at the top, or on its speaker grille. From its muted colour to its buckle-less carrying strap, the Kilburn II is stylish without being overly lavish – more punk rock than hair metal.

Look closely and you’ll be able to see the company has improved the speaker’s durability over its predecessor, too. The Kilburn II has corner caps around the edges, making it better for surviving accidental knocks. 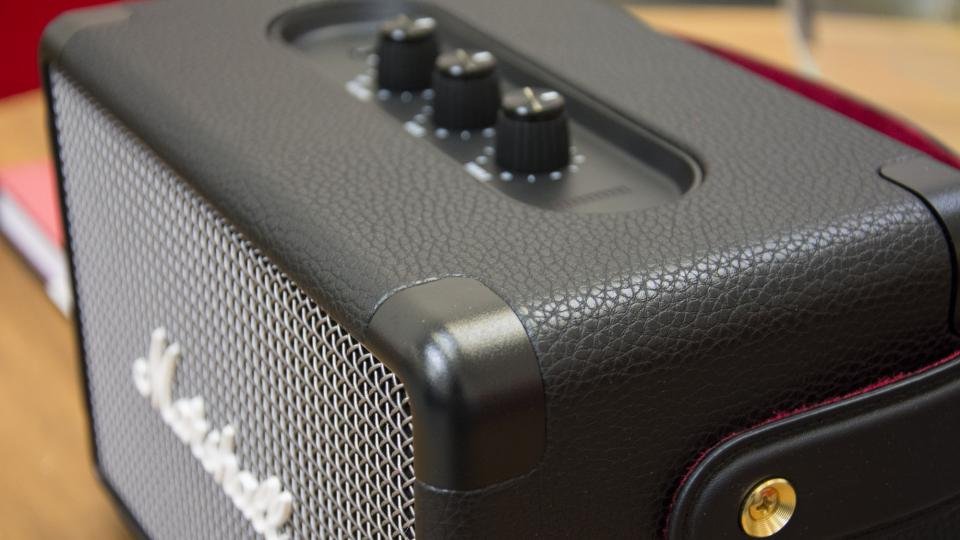 At the top of the speaker there are three knobs: one to control the speaker’s volume and switch it on, while the other two are to adjust the bass and treble. Here, you’ll also find a Bluetooth pairing button and a battery level indicator – its red hue much like the powering of a larger Marshall amp.

You will also notice that Marshall has decided to remove the clanky on/off switch in favour of it being integrated on the volume knob. As trivial as this might sound, I did miss switching on the old speaker, as its lever had a satisfying click to it. 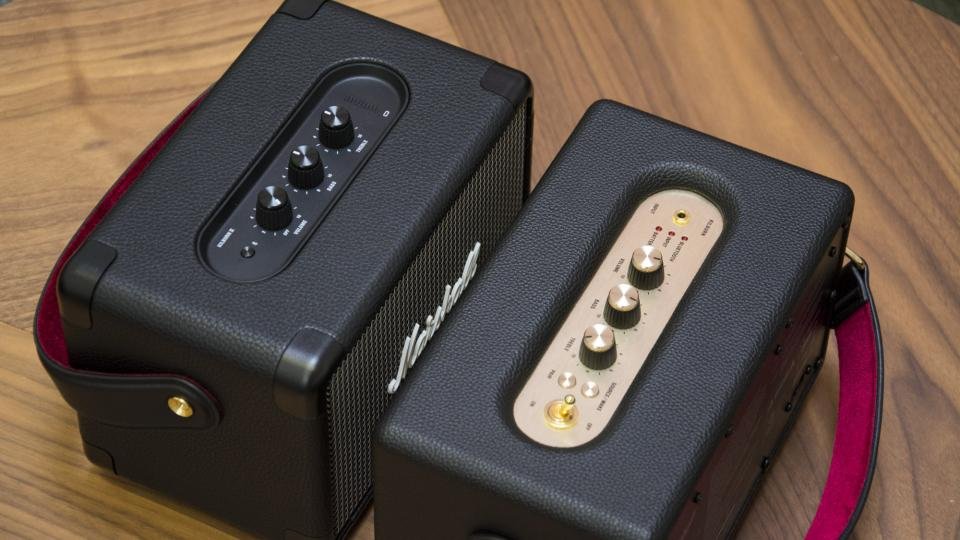 You’ll find the 3.5mm auxiliary jack input, which used to be at the top, now around the back. There’s still an 8-pin power connector for charging; it lasts around 20hrs, and can be fully charged from empty in 2.5hrs. In fact, a short 20mins charge nets you around 3hrs of playtime – great for when you’re out of juice.

The Kilburn II is IPX2-certified, which means it can withstand water drops – some light drizzle if not a downpour. It’s a definite improvement over its predecessor, though, and means you can take the speaker to the bathroom without having to worry about a little bit of water splashing onto it. 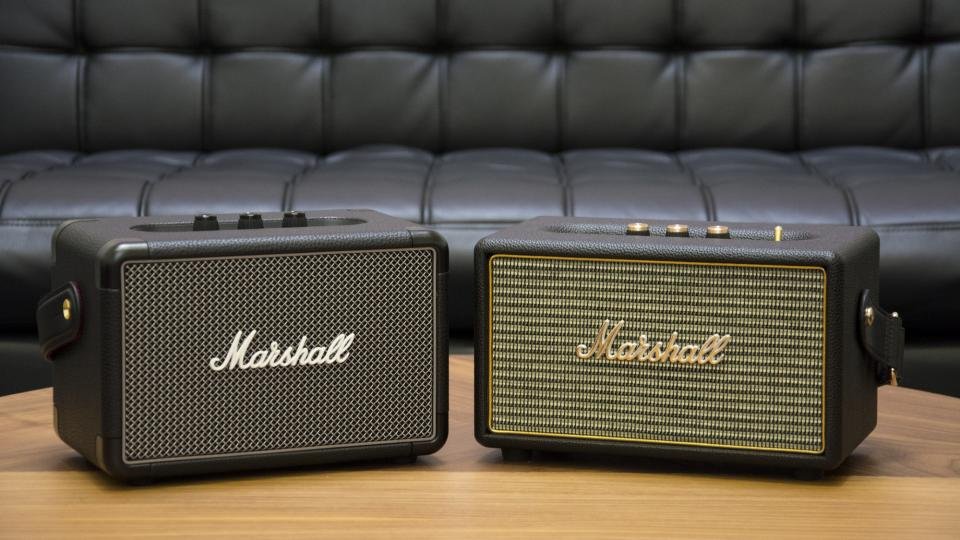 As for connectivity, the Kilburn II connects wireless through Bluetooth. Marshall has upped the ante this time around, and provided v5.0 with support for aptX. Not only does the newer version allow you to connect to the speaker from further afield, but the inclusion of aptX greatly improves the quality over Bluetooth. It means you get CD quality transmission over wireless.

Better still, the Kilburn II allows two devices to simultaneously connect to the speaker. If you live in a shared household, it’s a great way of sharing the speaker.

The speaker still lacks Wi-Fi connectivity, which means there’s no virtual assistant, like Amazon Alexa or Google Assistant built-in. A real pity for those who like asking their connected-speaker a series of questions.

Marshall’s latest speaker has improved on its predecessor, the most noticeable difference being the Kilburn II’s ability to project sound around the room – thanks to its rear-firing tweeters.

Unlike the older model, there’s now a speaker grille at the back. This means you don’t need the speaker to be facing you to enjoy your music. It’s still no match for the 360-degree sound achieved by the Ultimate Ears Megablast or Libratone Zipp, but it’s definitely an improvement over its predecessor.

Not only does this provide a room-filling sound, but it also improves the speaker’s ability to create a realistic three-dimensional sound space by adding a bit more width and depth. Dialled up to level six, I found the speaker to be loud enough for a large-sized room. At level 10 (max), the speaker was loud enough for a garden party.

Here, Marshall has improved the overall loudness of its speaker range. Where the original Kilburn’s max volume would suffice for a large-living room, it wasn’t enough for an outdoor party. Put into perspective, the new speaker achieves the same max volume as its predecessor at level seven – making its max around 33% louder.

Instrument separation, on the other hand, is distinctly average. With Enrique Iglesias – Bailamos, for example, the guitar and vocals are somewhat jumbled up – not as refined, separated and positioned as when using the JBL Xtreme 2.

As for bass, the Kilburn II has a stronger, more refined mid-bass slam. This makes the newer speaker a lot better than its predecessor for handling songs that have a lot of bass. Its sub-bass extension has also improved, as the speaker now extends as low as 52Hz; an improvement over the original Kilburn that reached 62Hz. That extra 10Hz does go a long way.

The mids are still recessed, and very much pushed back, especially in the upper mids. They are, however, better than its predecessor – with level six on the treble knob equating to around level eight on the older model. In comparison to its rivals, however, the Kilburn II struggles to keep up: vocals in Chris Brown’s Superhuman, for example, don’t sound as life-like as they do on the UE Megablast, Libratone Zipp and JBL Xtreme 2.

Again, over its predecessor, the highs are a little more refined and detailed, but still struggle to provide that high-end extension that you’d expect from a top-tier speaker.