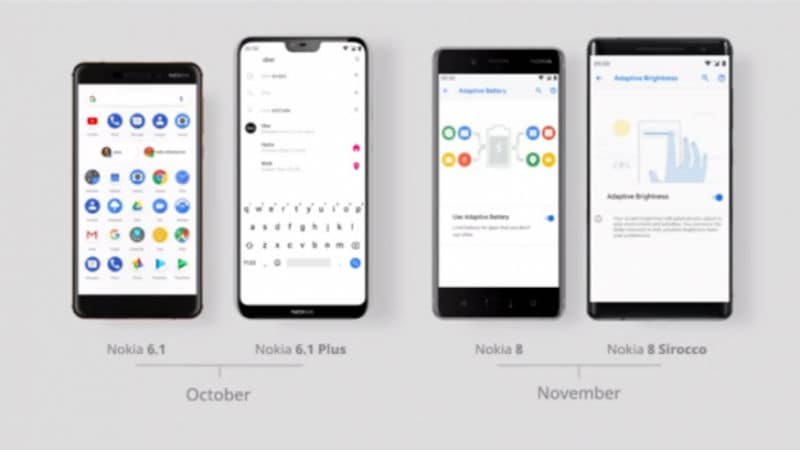 HMD Global at the launch event of Nokia 7.1 also detailed some information about the release of Android 9 Pieupdate for other Nokia smartphones. Android 9 Pie update recently rolled out to the company’s Nokia 7 Plussmartphone. Now, besides the unveiling of a new smartphone, Nokia has confirmed Android Pie updates for some more handsets. At the event, the company noted that the latest Android update was heading out to smartphones like Nokia 6.1, Nokia 6.1 Plus, Nokia 8, and Nokia 8 Sirocco starting this month.

As expected, HMD Global is prioritising some of its more popular smartphones for the Android Pie rollout. Firstly, that includes handsets running on the Snapdragon 600 SoC series, starting with the Nokia 6.1 and Nokia 6.1 Plus. Both the smartphones should start receiving the update sometime this month. On the other hand, the Nokia 8 and Nokia 8 Sirocco should get their respective Android 9 updates in November. Notably, the company did not provide any clear dates for the release of the update to the smartphones.

The latest information coming from Nokia is great to see as the company has gone all-in with Android One in the last few years. Its smartphones come with promises of monthly security updates and system updates for at least two years from their respective launches. During the event, Nokia also noted that it is planning to roll out Android 9 Pie updates to some more smartphones in its lineup following the initial list of handsets.

Notably, HMD Global launched the Nokia 7.1 running on Android Oreo, based on the Android One programme. However, it has promised an upgrade to Android 9.0 Pie slated for next month.