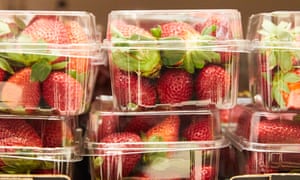 A $100,000 reward has been offered for information on the Queenslandstrawberry saboteur amid fears six brands across four states have been targeted with needle insertion.

Fruit sold under Berry Obsession, Berry Licious and Donnybrook brands have been affected, while New South Wales police warn fruit sold under the Love Berry, Delightful Strawberries and Oasis brands were inserted with needles by a possible copycat.

The Queensland premier, Annastacia Palaszczuk, has issued the reward over concerns for growers as well as consumers.

“How could any right-minded person want to put a baby or a child or anybody’s health at risk by doing such a dreadful act?,” Palaszczuk told reporters on Saturday.

“This is putting families’ lives at risk and it’s also putting the strawberry industry at risk. We need to catch those responsible.”

In a statement late Friday, NSW police said: “As the products have yet to be forensically examined, it is unknown if the contamination is related to the original Queensland incident or a copycat.”

Products sold under those labels have been pulled from shelves but it is unclear just how big the health issue has become with punnets being sold across Australia.

A health warning to throw out or cut up strawberries remains in Queensland, NSW, Victoria and South Australia as authorities hunt those responsible.

“We’ve got to look at this as a whole, it’s a very, very broad picture and we can’t speculate in any way, shape or form,” Queensland Acting Chief Superintendent Terry Lawrence told reporters on Friday.

He says there is no link between the Donnybrook berry contamination and the Berry Obsession and Berry Licious cases.

On Thursday, Queensland police announced they were also investigating a suspected copycat incident after a metal rod was discovered on top of strawberries inside a plastic punnet at Coles in Gatton.

… we have a small favour to ask. More people are reading the Guardian than ever but advertising revenues across the media are falling fast. And unlike many news organisations, we haven’t put up a paywall – we want to keep our journalism as open as we can. So you can see why we need to ask for your help. The Guardian’s independent, investigative journalism takes a lot of time, money and hard work to produce. But we do it because we believe our perspective matters – because it might well be your perspective, too.

The Guardian is editorially independent, meaning we set our own agenda. Our journalism is free from commercial bias and not influenced by billionaire owners, politicians or shareholders. No one edits our Editor. No one steers our opinion. This is important because it enables us to give a voice to the voiceless, challenge the powerful and hold them to account. It’s what makes us different to so many others in the media, at a time when factual, honest reporting is critical.