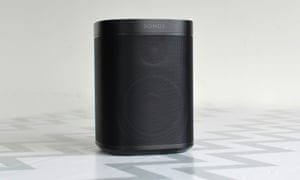 aving practically invented the multi-room wireless speaker category in 2005, Sonos has lagged behind in the race to become smart. Now the Sonos One is here, packing Alexa in the top and premium audio in the bottom.

The Sonos One is very deliberately designed to look, feel and sound like the company’s successful Play: 1 – a compact wireless speaker launched in 2013 at about £150 that was arguably the best for the money for years. Side-by-side they look identical apart from the top of the speaker, which is flat on the One, perforated by holes for the microphones that enable the voice assistant to hear you.

The 161mm tall cuboid with rounded corners is available in black or white and is designed like a traditional bookshelf speaker. It blends in quite well with most furnishings on shelves or similar, but looks a little odd on a kitchen table. Unlike Apple’s HomePod or Amazon’s Echo, the One is very much a directional speaker with one front-firing mid-woofer and tweeter hidden behind the metal mesh.

On top there’s a touch-sensitive button to turn on or off the microphones, volume up and down buttons and a pause-play button. Swiping from left to right across both volume buttons skips the track forward and back swiping the other way. The controls work well. There’s also an LED to show whether the mic is on and another to show when the speaker is on, connecting, muted or activated via the wakeword “Alexa”.

On the back there’s a button used for setting up the speaker and an ethernet port – which is unusual for a smart speaker.

Getting the One up and running is relatively straightforward using the Sonos app on a smartphone or tablet, hooking the speaker up to wifi or ethernet and then configuring your music services and Alexa. If you haven’t used any Sonos or Alexa devices before, the setup routine takes around 10 minutes as you have to set up accounts, but only needs doing once.

The best thing about being a wireless speaker made smart is that the Sonos One supports 49 different music services, which means it probably works with what you already have, rather than requiring you to sign up to yet another service just to use it.

That includes Spotify, Apple Music, Google Play Music, Amazon Music and TuneIn, which means you can get any number of local and international radio stations too. The complicating factor is that Alexa only supports full voice control of Amazon Music, TuneIn and Spotify, meaning the rest are limited to simple playback and volume controls.

As a voice assistant

The One currently has Amazon’s Alexa built into it, but Sonos is also promising to roll out support for Google’s Assistant, potentially making it a multi-assistant device. As some virtual assistants are better than others at different tasks, that could be a real boon, but for now the One gets a helping hand from the progress already made by Amazon with its Echo line of smart speakers.

The Sonos One has no problem hearing you with its six-mic array in the top, even when playing music and over the noise of a kitchen hood going full blast. It also has most of the functionality of Alexa built into an Amazon Echo, including multi-user support, control over a plethora of smart home devices, answering questions, doing calculations, setting multiple named timers, alarms and reminders, looking into your calendar and playing the popular flash briefing with the weather and news from multiple sources.

It can also use any number of third-party Alexa skills, but there are some limitations. You can’t change the wake word from “Alexa”, there’s no support for voice calling, notifications or playing ebooks. You also can’t set up multi-room audio via voice, or move the currently playing music to another room.

Notably in the time I have been testing the One, Alexa support has vastly improved, including its ability to hear you, and the addition of what are considered standard Alexa features on any of Amazon’s own devices. It’s also worth noting that the One plays well with other Alexa devices, including multiple Ones or Amazon’s Echo speakers. It uses echolocation to figure out which speaker is closest to you, and only that speaker responds.

As a music speaker

More so than most other smart speakers, the Sonos One is a music speaker first. The Sonos app and system is the best in the business for ease of use and flexibility, combining all your music services and libraries, including different users’ accounts with the same service, into one searchable place. Anyone with the Sonos app on their phone can control the music too, including guests attached to your wifi network, which is handy for parties.

For those who use Spotify, you can also control the One from your Spotify app using Connect, making it easy to continue your personal listening on the speaker instead.

You can command the One through your voice to play any track, album or playlist from Spotify or Amazon Music, skip, pause or shuffle tracks, adjust the volume in levels from zero to 10 and ask what’s currently playing. As it is powered by Alexa it works very well, recognising track names and albums, including slightly tricky entries such as Blue Sky Black Death’s Euphoric Tape II. If you have more than one music service you can specify which one you want.

Anything more advanced than that needs to be done via the app, but you can use a combination of the app and voice at any time, such as queuing up a playlist from Apple Music via the app and then skipping through the tracks via voice. Spotify’s Radio and Podcasts features aren’t supported via voice.

On its own or as a pair

Out of the box the One easily sounds better than any other Alexa-packing speaker. Like other Sonos speakers, it has a room tuning feature called Trueplay that sees you walk around with an iOS device waving it up and down using the mic to tune the speakers. Tuning isn’t available on Android, unfortunately.

The One, like Play:1 before it, punches above its weight in terms of audio quality. Tracks have plenty of depth and vibrancy with sparkling highs and powerful lows, while nothing gets lost in more aggressive moments. The One produces an excellent rendition of tracks such as the live Hotel California from Hell Freezes Over by the Eagles (a famously good track to use to sample audio), with all the snaps, taps and claps beautifully clear and engaging. But it is also comfortable blasting out anything from EDM to classical, sounding particularly good with tracks from Glaciers by Blue Sky Black Death or Cathode Girls by Com Truise.

Filling even a large room is easy with the One, while it has enough bass to satisfy most people without being overly dominated by it – those looking for truly deep, bone-shaking bass will have to look elsewhere (or buy Sonos’s optional £699 wireless sub).

A single One sounds great, but the Sonos comes into its own in a stereo pair, significantly expanding the soundscape and producing the kind of audio quality and immersive experience that you would normally expect of a much larger set of traditional speakers and a quality amplifier. A pair of Ones are available for £350, and while that certainly isn’t cheap, you have to spend a significant amount more to find a better audio experience.

For comparison, the second-generation Amazon Echo costs £90, the Echo Plus costs £140, the Google Home costs £129 and the Apple HomePod costs £319.

The Sonos One takes an already great wireless speaker in the form of the Play:1 and puts most of what’s great about Amazon’s Alexa in the top. The result is the best all-round music-focused smart speaker available in the UK.

It sounds brilliant on its own or even better in a stereo pair, and can be made part of a multi-room audio system with other Sonos gear. One of the best bits is that you can plug pretty much any music service into the Sonos app, which unifies them all into one searchable system. The only downside is that you can only have full voice control over Spotify, Amazon Music and TuneIn, but the basics are there for the rest.

Alexa brings with it plenty of smarts, skills and features, but the promise of being able to add Google Assistant via a software update later makes the One possibly the best future-proofed device for agnostics. And if you discover that you don’t actually want an always-listening device in your house you can turn off the microphones and simply use it as a wireless speaker with full functionality through the app.

At £200 the One is a tough combo to beat for the price, and is a significant upgrade over cheaper smart speakers such as Amazon’s Echo or the Google Home.