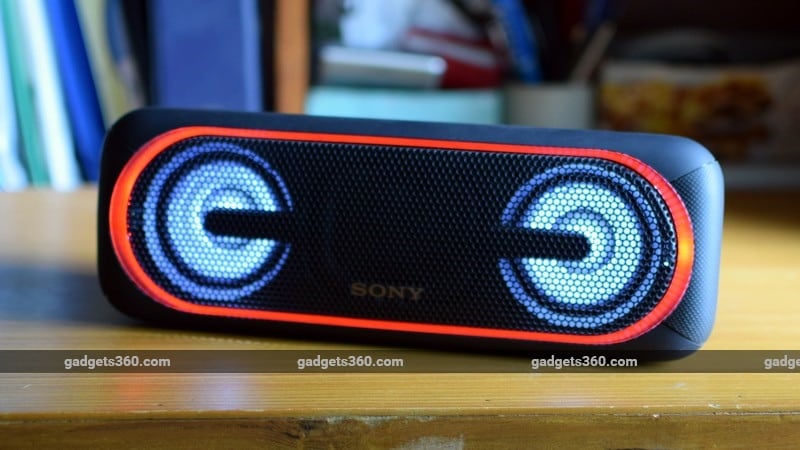 If you love a good weekend getaway, you should definitely have a portable Bluetooth speaker with you. The audio market is flooded with a wide range of options, across brands and price segment. Sony recently added three new offerings to its EXTRA BASS series and today, we’ll be testing the SRS-XB40, which is the most powerful of them.

It boasts of features like a 24-hour battery life, water resistant design, the ability to daisy chain it to other similar speakers, and of course, flashing lights. Priced at a slight premium of Rs. 16,990, let’s see how well it performs.

The XB40 is a bit on the larger side for a portable speaker and it’s also fairly heavy at roughly 1.5kg. It looks and feels quite rugged and the soft rubber lining all around gives it a premium feel. The speaker is designed to be placed horizontally but you can just as well use it standing upright, although there aren’t any rubber feet on the side like there are on the bottom.

All the buttons are placed on the top, and from here you can control media playback, adjust the volume, answer a phone call, or trigger your phone’s voice assistant. The EXTRA BASS button engages the device’s dual passive radiators for more bass, and the same button can also be used for enabling or disabling the lights. The power button also lets you pair the speaker with your Bluetooth device, in case you it doesn’t support NFC. The XB40 can work with up to three simultaneous connections. 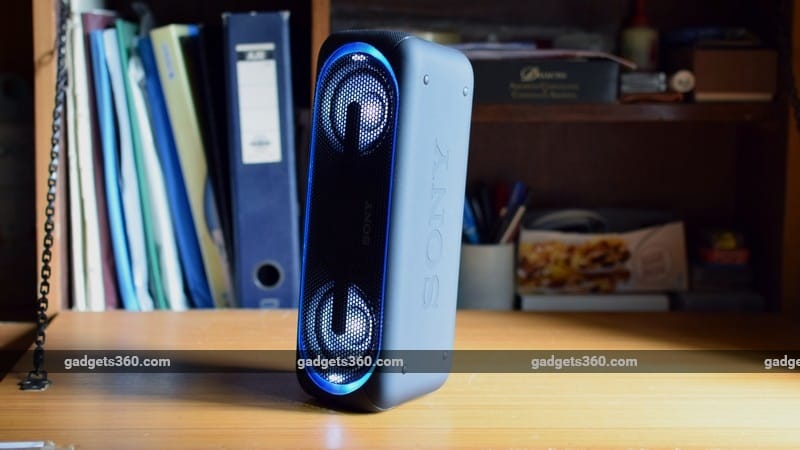 There’s a flap on the back of the speaker which protects the ports from moisture. Here, we have an aux-in port, USB port, DC-in port (9.5V) for charging, and a reset button. The USB port can be used to charge your personal electronic devices.

In the front, there’s a metal mesh grille protecting the drivers. We have two full-range 61mm drivers for stereo sound, and a passive radiator facing forwards. The second radiator is placed at the back, and can be seen through a similar metal mesh. The SRS-XB40 has three types of lighting – an RGB line that runs along the edges of the mesh grille, speaker lights, and a strobe for each driver. The pattern of the lights can be controlled via the Sony Music Centre app.

The SRS-XB40 supports Bluetooth 4.2 and streaming codecs such as SBC, AAC and LDAC. The latter is Sony’s proprietary high-resolution codec, similar to Qualcomm’s aptX HD. You’ll need a compatible Xperia device but it’s also now baked into Android Oreo so compatibility will become wider. When connected to a LDAC capable phone such as the Google Pixel, the SRS-XB40 automatically uses the best available codec. The drivers can handle a frequency range of 20Hz to 20,000Hz.

The SRS-XB40 is IPX5 rated so it can withstand light splashes of water. In the box, you get only an AC power adapter. The device is officially only available in black in India, but there are more colour options in other countries.

With an impressive list of features and specifications, it’s time to see how well this translates into actual performance. The XB40 doesn’t produce an omnidirectional sound, which takes some getting used too at first. This means that placement is very important, as you can’t just leave it anywhere in the room and expect it to sound good. It works best when it’s facing you and placed on the same plane as your ears or higher. Setting it up is easy with NFC or regular Bluetooth pairing. The light show kicks in once the music starts playing, and changes based on the beats and rhythm. Sony’s Music Center app adds more features and functionality to the speaker. The Android app isn’t very well designed but it’s functional. It is missing one critical feature, which is a display of speaker’s battery status. The iOS app is slightly better designed. On the main screen of the app, you can pair more of Sony’s EXTRA BASS speakers (up to 10), switch to the auxiliary input, or play songs that are on your device. You can also adjust the volume of the speaker, which is independent of your device’s volume level.

There’s also another app called Fiestable, that you can download. This lets you add DJ-like effects to the current music track and change the colour of the RGB light strip. There are also gesture-based actions for controlling music playback and adding DJ effects, but honestly, this just feels very gimmicky. The volume of the after-effects is nearly twice as loud as the music track, which makes them extremely jarring and irritating.

The SRS-XB40 can get extremely loud which makes it good for outdoor parties. Enabling the EXTRA BASS feature surprisingly doesn’t muddy the sound as we were expecting. In fact, with the radiators firing too, the soundstage gets a bit wider and you get some more thump, even at lower volume levels. We used a Samsung Galaxy S8+ for most of our tests, which included the use of FLAC files and streams from Apple Music. 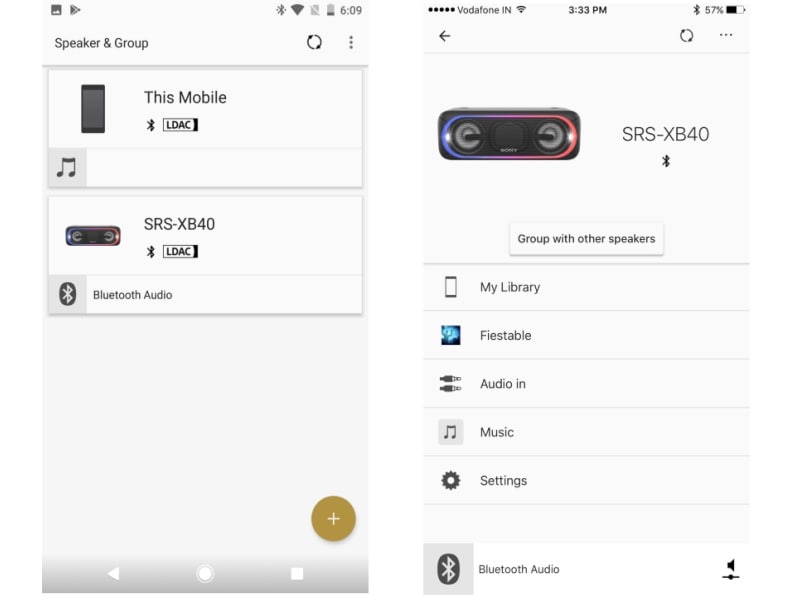