This is a live blog. Check back for updates.

The Dow closed the session down 165 points, posting its third straight day of losses. The benchmark fell as much as 280 points Tuesday after Apple’s warning about the coronavirus spurred caution. Apple closed off the lows, down 1.8%. The S&P 500 slid 0.3%, while the Nasdaq Composite eked out a small gain to close at a record as gains in Netflix, Facebook as well as Tesla supported the tech-heavy average.— Li

The stock market may be hovering around all-time highs, but just 5 companies are contributing to the S&P 500′s earnings growth, Goldman Sachs said. Those five stocks are “FAAMG” – or Facebook, Amazon, Apple, Microsoft and Google parent Alphabet. This basket of stocks grew earnings 16% year-over-year, Goldman found. The S&P 500′s fourth quarter earnings are up 2% overall, but if these 5 stocks are removed, the index’s growth is flat. —Stevens

3:07 pm: Final hour of trading: Stocks off their lows as Apple cuts losses

With roughly one hour left in the trading session, the major averages traded well off their session lows. The Nasdaq Composite was headed for a record closing high while the Dow was down just 148 points. Earlier in the day, the Dow dropped as much as 281 points, or nearly 1%. —Imbert

2:51 pm: Lost GDP from coronavirus will be gained back, Stifel’s Bannister says

Lost economic output due to the coronavirus will be eventually return, Stifel’s Barry Bannister told CNBC. The firm’s head of institutional equity strategy said he is “not terribly concerned” about the virus’ long-term economic impacts. “The GDP we lose in the first quarter will be gained back in the latter part of the year,” he said on “Power Lunch.” With at least 100 million people facing government travel restrictions, Bannister suggested Chinese consumers may have “pent-up demand to buy things” when the outbreak dissipates. — Stankiewicz

The Nasdaq Composite Index has turned positive as Apple bounces off its lows of the day. Apple is now down less than 2%. It seems investors are not heeding Jim Cramer’s words and believe the coronavirus impact is already priced into the stock, or at least the company can make up for it in other areas. Other major averages were also off their lows. Gains in Amazon and Facebook also helped. -Melloy 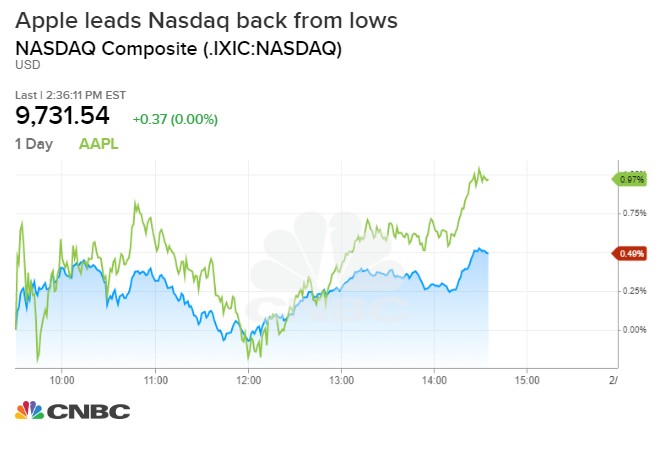 The number of declining stocks at the New York Stock Exchange outpaced those rising. FactSet data shows that about nine NYSE stocks declined for every five stocks rising. The major stock averages, however, traded off their session lows, with the Dow down about 190 points. —Imbert

Alphabet, Kansas City Southern and Visa are among the 53 S&P 500 components that reached an all-time high. They achieved this despite the broad index trading lower following Apples quarterly revenue warning. Here are some other stocks that hit record highs:

Shares of Macy’s are down 3.4% and trading at $16.11 per share after Standard & Poor’s cut its credit rating for the retailer. Dow Jones reported that Macy’s rating is now BB+, which is considered junk status, down from a BBB- rating. Macy’s announced earlier this month that it would close 125 stores over the next three years, and its stock is down more than 30% over the past year. — Pound

12:28 pm: Cooperman, Bank of America say election is bigger risk to the market than coronavirus

Leon Cooperman said Bernie Sanders is a bigger threat to markets than coronavirus, and he is not alone. Bank of America Global Fund Manager Survey says the U.S. Presidential Election is the biggest threat to markets.

Around midday ET, the major averages were broadly lower after Apple warned its quarterly revenue may not meet its guidance as the coronavirus outbreak hinders the tech giant’s supply chain. The Dow traded about 260 points lower, or 0.9%. The S&P 500 and Nasdaq were down 0.7% and 0.5%, respectively. —Imbert

Shares of food company Conagra cratered more than 8% after it revised its 2020 outlook due to “consumption softness” and weaker holiday restaurant traffic than last year during the fiscal third quarter. Conagra now estimates flat to 0.5% sales growth, compared to the prior estimate of 1% to 1.5% growth. Conagra said it expects adjusted EPS of $2.00 to $2.07, down from the previous $2.07 to $2.17 earnings per share range. – Fitzgerald

The Dow Jones Industrial Average lost more than 260 points, hitting its session low, in midday trading as fears about the Chinese coronavirus caused worried investors to dump some more stock. Apple dropped nearly 2.5% after the iPhone maker said it was unlikely to meet its March-quarter sales guidance as the coronavirus outbreak was pressuring its supply chain. – Fitzgerald 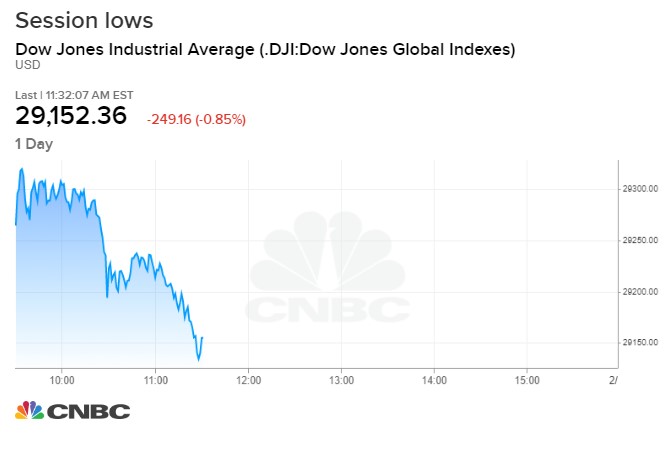 11:22 am: Utilities head to another record as investors pay up for yield

The S&P 500 utilities sector is heading for another record high close, as investors look for the benefit of both higher yielding stocks and a safety play. The S&P 500 Utilities sector is poised to close at a record as long as it closes above 356.33. XLU, The Utilities Select Sector SPDR Fund ETF was up 0.6% Tuesday and is up 9.6% year-to-date. XLU hit a new intraday high of $70.96, and if it closes at its current level just below that, would also be a record closing high. Utilities have benefited from investors looking for yield, and investors have been rushing into the sector, just as they have to corporate bonds which have seen record inflows. —Domm

11:20 am: Fed’s Kaplan expects no move on interest rates this year

Dallas Fed President Robert Kaplan said the central bank should leave rates where they are this year. In an essay released Tuesday morning, the central bank official also said U.S. growth likely will be “solid” this year. But he also said he is mindful of risks to the forecast, particularly from coronavirus. His expectation of no rate moves is at odds with the market, which expects at least one cut by September and possibly another before the end of the year. —Cox

Jaguar Land Rover only has enough auto parts from China to continue production in Britain for the next two weeks because of the impact of the coronavirus on its supply chains, the company’s CEO said Tuesday. Britain’s largest automaker, which has three factories in the U.K., has had to fly in parts from China in suitcases. Jaguar Land Rover is not currently experiencing sales in China and it is unclear when they will resume. However, the firm’s Chinese factory is slated to re-open next week. —Miller

10:47 am: Legg Mason on track for best day since 2008 after Franklin announces deal

Legg Mason rocketed more than 24% on the week’s first day of trading after Franklin Resources announced it offered to acquire Legg for $50 per share in cash. The announced deal, which has put Legg Mason stock on track for its best day since 2008, would combine two of the largest so-called active managers in the U.S. and create a $1.5 trillion investment juggernaut. Legg Mason board member and noted activist investor Nelson Peltz hailed the deal as “compelling.” — Franck

Shares of streaming video giant Netflix rose about 2% in early trading, setting a new 52-week high at $388 per share. The stock is still below its all-time highs of more than $420 per share in 2018. MoffettNathanson said in a note to clients n Tuesday that it was hard to justify the current valuation of Netflix using cash flow, but said the stock “continues to work as a 10-year dream” with investors expecting it to be the next Amazon. The firm raised its price target on the stock to $290 per share from $210. —Pound

10:23 am: ‘Chernobyl-like’ response by China means ‘worst is yet to come’ for coronavirus, Raymond James says

As the coronavirus outbreak rages on, Raymond James said China’s delayed response is inciting comparisons to the Soviet Union’s response to the Chernobyl nuclear disaster, and that things could get worse in terms of the economic and market impact. China’s “slow reaction and continued unanswered questions appear to be sowing real concerns among the Chinese people,” the firm said, adding that it has been “receiving questions on whether or not this will be a ‘Chernobyl-like’ event for China — the comparison being the impact of the Chernobyl nuclear power plant disaster on the fall of the Soviet Union.” While the stock market has recovered initial losses from the coronavirus-induced sell-off, Raymond James said it was a “liquidity rally” and that the market is “underappreciating the potential dangers.” —Stevens

10:15 am: Cramer says he thought Apple would be trading lower after coronavirus update

CNBC’s Jim Cramer said Tuesday he thought Apple’s stock would be down further after the iPhone maker announced it would not meet its quarterly revenue forecast due to the coronavirus outbreak. The stock was down around $7.50, or more than 2%, but Cramer said he believed it would be closer to $10 or 3.1%. “I am surprised it’s not down more because it’s not just supply, it’s demand,” Cramer said on “Squawk Box.” – Stankiewicz

As of Tuesday morning, a total of 73,400 cases of the coronavirus have been confirmed and the death toll from the epidemic has risen to 1,874. Concerns are rising that the coronavirus stemming from China could escalate further. Former FDA Commissioner Scott Gottlieb said Japan appears to be “on the cusp of a large outbreak.” French Health Minister Olivier Veran has reportedly cautioned there is a “credible risk” that the virus could escalate into a global pandemic. —Li

9:35 am: Dow drops at the open, but making back losses quickly

The Dow opened about 160 points lower on Tuesday, but was quickly making back those losses and was last down about 100 points. The benchmark was headed for its third consecutive day of losses, after Apple said its revenue will miss estimates due to the coronavirus. The S&P 500 and the Nasdaq Composite dipped 0.2% and 0.3%, respectively. The warnings from Apple dented market sentiment as investors remain on edge about a potential economic fallout from the epidemic. Apple dropped more than 2%, the biggest loser in the 30-stock Dow.—Li

Shares of Tesla have risen more than 4% in premarket trading after analysts at Morgan Stanley and Bernstein raised their price targets on the stock. Both new targets are below where the stock closed on Friday, but Morgan Stanley’s Adam Jonas said the bull case scenario for the company is $1,200 per share, up from $650 per share. That bull case is about 50% above where the stock closed last week. —Pound

Shares of Walmart ticked 1.4% higher in premarket trading on Tuesday despite missing analyst estimates for its fiscal fourth-quarter earnings. The retailer saw weak demand for toys, apparel and video games during the holiday season. Walmart also issued a 2020 outlook that came up short of expectations as the world’s largest retailer anticipates e-commerce growth will slow. Initially, shares of Walmart were down 1% in extended trading but have since recovered. A bright spot for Walmart was its e-commerce sales during the quarter were up 35%, fueled by its best growth yet for Walmart.com and strength in grocery. —Fitzgerald

8:22 am: Kroger shares surge after Berkshire reports a new stake

Shares of Kroger jumped more than 6% in premarket trading on Tuesday after Berkshire Hathaway revealed it owned 18.9 million shares of the grocery chain at the end of the fourth quarter. The investment is worth $549 million at that time. Warren Buffett’s conglomerate on Friday disclosed the new stake in a 13-F filing, which documents holdings as of end of December. —Li

IPhone suppliers are getting hit hard after Apple said it does not expect to hit its quarterly revenue forecast due to lower iPhone supply globally and lower Chinese demand as a result of the coronavirus. Qorvo, a radio frequency chip supplier for Apple, fell nearly 3% in premarket trading on Tuesday. Chip company Skyworks Solutions fell 3.5% and Lam Research ticked 3.6% lower. Other chip suppliers like Broadcom, Micron and Intel, fell 2.2%, 2.7% and 1.4%, respectively. Semiconductor companies Nvidia and Xilinx dropped 1.3% and 2% in premarket trading. —Fitzgerald

U.S. stock futures pointed to a lower open on Wall Street after tech giant Apple warned it may not meet its quarterly revenue guidance due to the coronavirus. Dow Jones Industrial Average futures were down more than 150 points while S&P 500 and Nasdaq-100 futures pointed to losses of at least 0.4%. Apple shares, meanwhile fell more than 2% in the premarket. —Imbert