Both now and then, the S&P had gained about 25% over the previous year and around 15% from an August pullback. In December 2017, an intensely anticipated policy shift occurred with passage of the corporate tax cut; this past December we got the hotly anticipated phase-one U.S.-China trade deal.

This created an all-in rally that truly earned the “melt-up” label, led by the popular big tech stocks and refusing to slow down or pull back despite becoming very stretched above its longer-term trend. 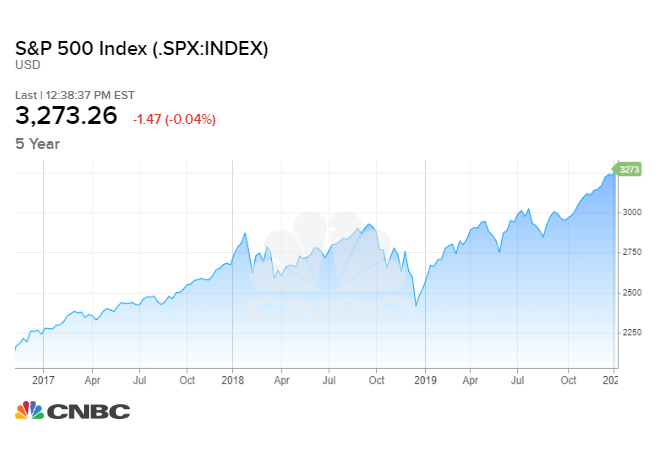 Right now, stocks are almost back to the same valuation levels based on forecast S&P 500 earnings — which at the time had not yet fully accounted for the impact of the just-passed corporate tax-cut law. Profits would surge by 20% in 2017, on quicker growth and lower tax rates, so in effect the market was a bit less expensive than it appeared in January 2018. 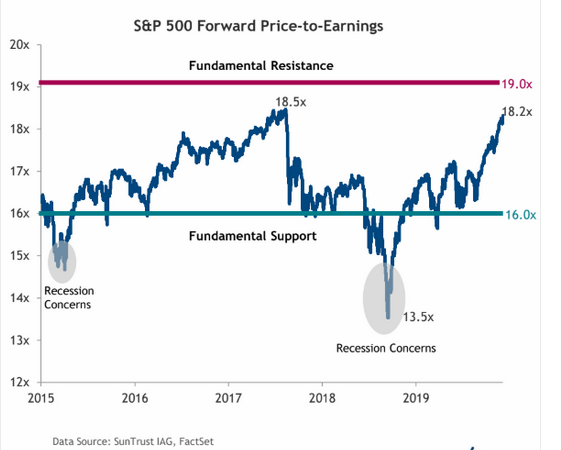 Similarly, trader sentiment and hedge-fund positioning are almost — but not quite — as unreservedly aggressive as they were then, as investor surveys and the patterns in options-trading volume confirm.

Bespoke Investment Group calculates the market has been statistically “overbought” 98% of all days since October, the longest such stretch since late-2017-early 2018. 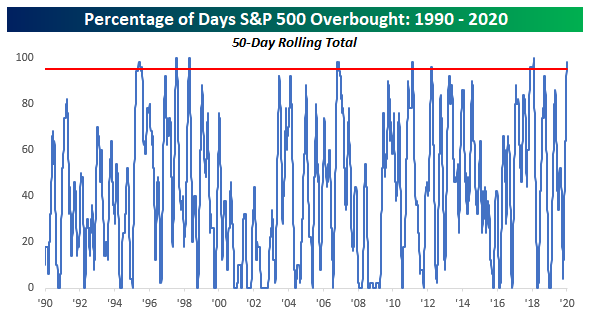 In the prior ramp-up, retail investors poured money into stock funds, something not occurring now. And the velocity of the current run to record highs has not been as headlong as it became by Jan. 26 of 2018.

Other differences are also crucial: Interest rates were higher and the Fed was embarking on a determined tightening campaign then, while the Fed now is intently on hold after three rate cuts last year. In January 2018, the mania for selling volatility options reached an extreme and reversed — causing some exchange-listed volatility instruments to implode and exacerbate the selloff. While volatility sellers are again active, not as much dry tinder has built up along this front, by all evidence.

Perhaps the most crucial way this feeds into equity performance is through corporate credit markets, which right now are ferociously strong. The yield on lower-investment-grade corporate debt is a good deal lower than two years ago, supporting stocks and reflecting ample liquidity.

And indeed mega-cap growth stocks have lifted off relative to the rest of the market. The Nasdaq 100 — dominated by FANG stocks, Microsoft and Apple — has stretched higher by 35% in the past year. And it’s up more than 4% in the past 20 days, while the “average stock” as gauged by the equal-weighted S&P 500 index, has been flat. 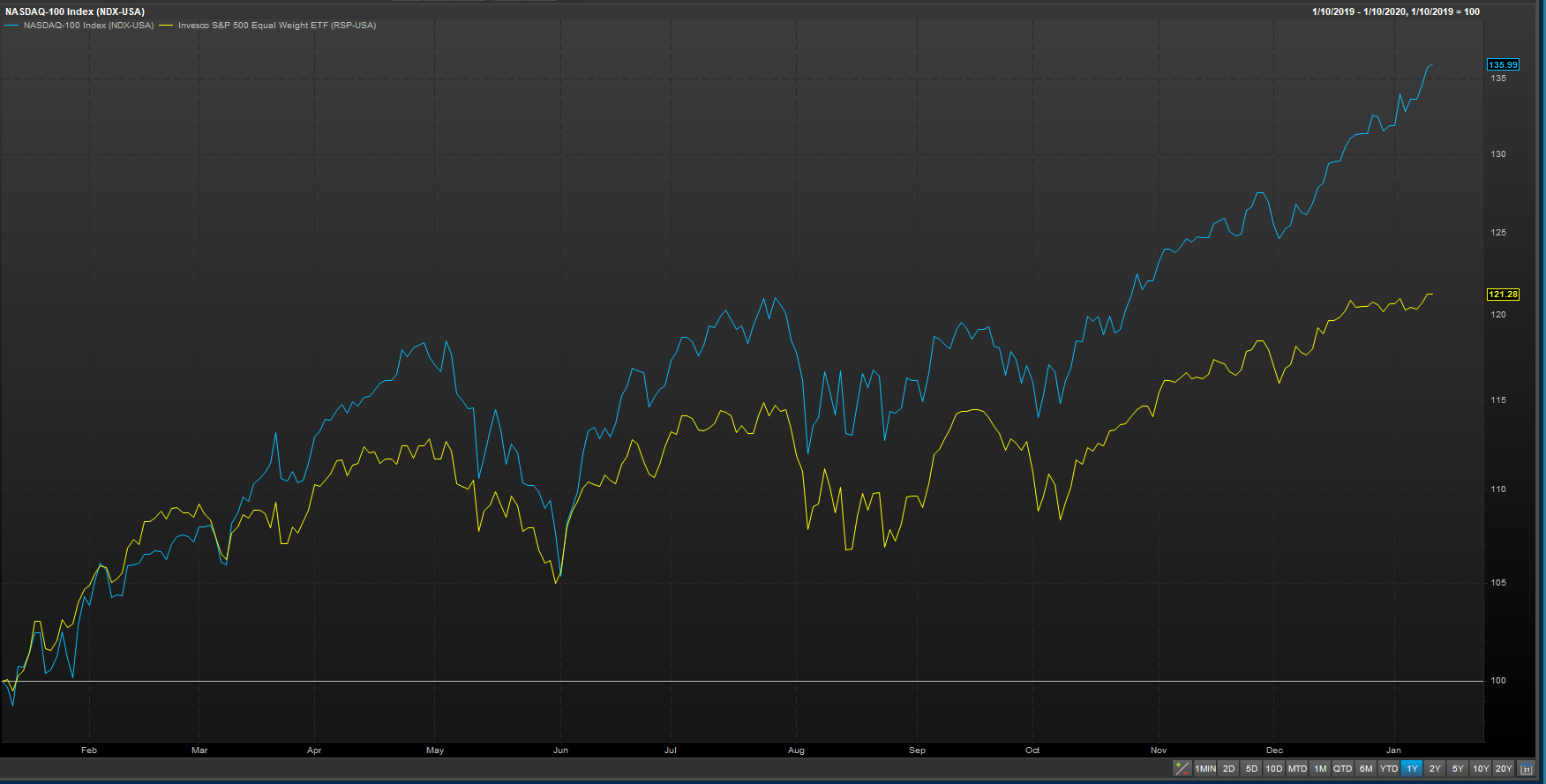 This market is hunting ruthlessly for reliable, durable cash flow streams and investors are emboldened by the strong credit markets and reduced fears of a recession to pay ever-higher prices for them.

Nowhere is this more evident than with Apple, a stock that’s doubled in the past year with virtually no observable change in its financial performance. Persistently relegated to a discounted valuation for most of the past decade, its price/earnings multiple has also doubled in a year and the stock is now pushing a 5% weight in the S&P 500.

This is truly a radical perception shift rather than corporate revival. Apple is projected to have $63 billion in free cash flow this fiscal year — about what it reported in fiscal 2018.

But the market is now more confident a smoother iPhone upgrade cycle and services growth make the cash flows more enduring for years to come. This chart of the stock’s free-cash-flow yield show the drastic revaluation of the company, though only to about the same levels as the broader market. 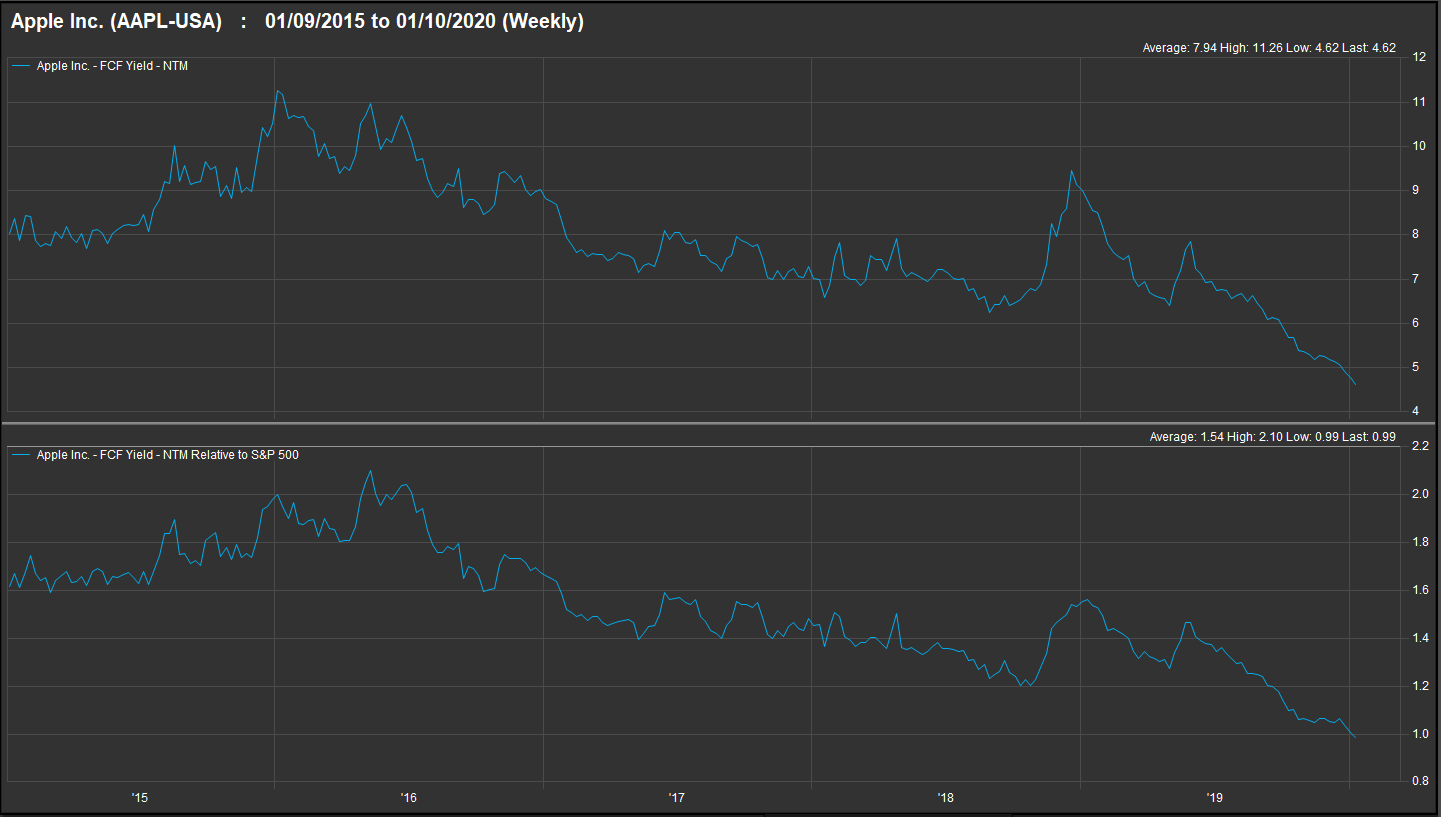 On some level, this all amounts to a bull market doing typical bull market things. Long market uptrends tend to stretch to or above 20-times earnings; mega-cap growth stocks typically become the anointed leaders; unwelcome news such as the U.S.-Iran confrontation tend to be mere gut checks and buying opportunities and investor optimism builds as the indexes climb.

But there are limits and inevitable switchbacks along the way. The extremes in sentiment can certainly grow more extreme from here, but ultimately will have to be worked off, either through a flattening of the market or quick pullback.

One other difference from 2018 is, the S&P 500 just broke to a new high in October beyond an 18-month trading range, in what could be the start of a whole new up leg for the market as recession fears remain at bay. In January 2018, stocks had been making new highs for much longer and over the prior two years the S&P was up 45% by the January peak; today the index is up just 18% from two years ago.

Can a market both be overheated in the short term but just warming up for a longer-running advance? We just might see.