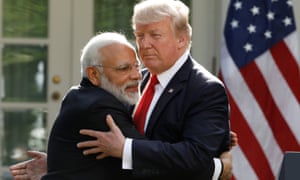 US president Donald Trump looked set to open a new front in his trade wars on Monday with a plan to end preferential trade treatment for India that allows duty-free entry for $5.6bn worth of the country’s exports to the United States.

Trump, who has vowed to cut US trade deficits, has repeatedly called out India for its high tariffs. The US Trade Representative’s Office accused Indiaof bringing in a “wide array of trade barriers that create serious negative effects on United States commerce”.

Trump said in a letter to congressional leaders: “I am taking this step because, after intensive engagement between the United States and the government of India, I have determined that India has not assured the United States that it will provide equitable and reasonable access to the markets of India.”

US trade officials said scrapping the concessions would take at least 60 days after notifications to Congress and the Indian government.

India is the world’s largest beneficiary of the Generalized System of Preferences (GSP) program and ending its participation would be the strongest punitive action for the South Asian nation since Trump took office in 2017.

The US Trade Representative’s Office said removing India from the GSP program would be done through a presidential proclamation.

India said it did not plan to impose retaliatory tariffs on US goods, saying the preferential terms bring “actual benefit” of just $250m a year. Trade official Anup Wadhawan said on Tuesday the two countries had been working on a trade package to address each other’s concerns.

Trade ties with the US were hurt after India unveiled new rules on e-commerce limiting the way internet retail giants Amazon and Walmart Inc-backed Flipkart do business.

The e-commerce rules followed a drive by New Delhi to force global card payments companies such as Mastercard and Visa to move their data to India and higher tariffs on electronic products and smartphones.

Most of the exports were intermediate goods not produced in the US because they were low in the manufacturing value chain, it added.

The US goods and services trade deficit with India was $27.3bn in 2017, the US Trade Representative’s Office said.

We made a choice…

… and we want to tell you about it. Our journalism now reaches record numbers around the world and more than a million people have supported our reporting. We continue to face financial challenges but, unlike many news organisations, we haven’t put up a paywall. We want our journalism to remain accessible to all, regardless of where they live or what they can afford.

This is The Guardian’s model for open, independent journalism: free for those who can’t afford it, supported by those who can. Readers’ support powers our work, safeguarding our essential editorial independence. This means the responsibility of protecting independent journalism is shared, enabling us all to feel empowered to bring about real change in the world. Your support gives Guardian journalists the time, space and freedom to report with tenacity and rigour, to shed light where others won’t. It emboldens us to challenge authority and question the status quo. And by keeping all of our journalism free and open to all, we can foster inclusivity, diversity, make space for debate, inspire conversation – so more people have access to accurate information with integrity at its heart.

Guardian journalism is rooted in facts with a progressive perspective on the world. We are editorially independent, meaning we set our own agenda. Our journalism is free from commercial bias and not influenced by billionaire owners, politicians or shareholders. No one steers our opinion. At a time when there are so few sources of information you can really trust, this is vital as it enables us to give a voice to those less heard, challenge the powerful and hold them to account. Your support means we can keep investigating and exploring the critical issues of our time.

Our model allows people to support us in a way that works for them. Every time a reader like you makes a contribution to The Guardian, no matter how big or small, it goes directly into funding our journalism. But we need to build on this support for the years ahead.