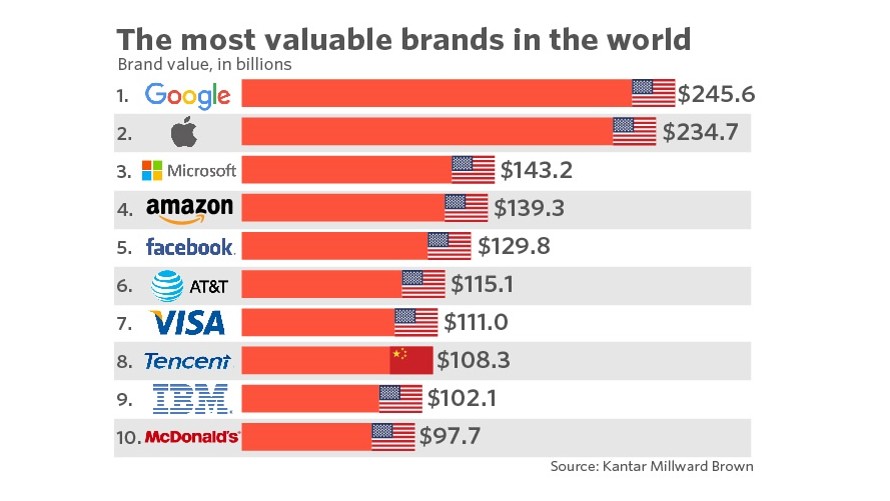 Corporations invest huge amounts of money in the design, launch, and ongoing promotion of their brands. But branding itself is a somewhat intangible asset.

Acknowledging and managing a company’s intangible assets taps into its hidden value, according to brand consulting firm Brand Finance.

In its 2018 annual report on the world’s most valuable brands, Brand Finance calculates the values of brands by estimating the likely future revenues that are attributable to a brand by calculating a royalty rate that would be charged for its use. That provides a ‘brand value’ understood as a net economic benefit that a licenser would achieve by licensing the brand in the open market.

Based on Brand Finance’s report, Global 500 2018, these are the most valuable brands in the U.S.

The e-commerce and cloud computing company, based in Seattle, was founded by Jeff Bezos on in 1994.

The Race to A Trillion Dollar Market Cap

Microsoft, (MSFT) a technology company founded in 1975 and based in Redmond, Wash., develops, manufactures, licenses, supports and sells computer software, personal computers, and electronics. Above, the Microsoft store on Fifth Avenue in New York City.

The multinational financial services company is based in San Francisco.

The ubiquitous bank is owned by JPMorgan Chase Bank,  (JPM) which is based in Manhattan.

The home improvement retailer operates about 2,200 stores across North America.

The multinational financial services company headquartered in Charlotte, N.C. started out as the Bank of Italy in 1904.

Founded in 1923, the international mass media and entertainment conglomerate is based in Burbank, Calif.

The conglomerate works in a number of industries, including power generation, oil and gas production equipment, aircraft engines, medical imaging, and financing. Above, a gas turbine is transported from GE’s (GE) plant in Greenville, S.C.

The international investment bank and financial services corporation is based in New York City.

The iconic cigarette brand is owned and manufactured by Philip Morris. (PM)

Oracle, a computer technology corporation, is based in Redwood Shores, Calif. Above, the Oracle Arena in Oakland, Calif., home to the Golden State Warriors.

Nike designs, develops, and manufactures footwear, apparel, equipment, accessories, and services. Above, Serena Williams plays at the U.S. Open in 2016.

The video-sharing website headquartered in San Bruno, Calif. is owned by Alphabet. (GOOG)

The well-known fast food company, founded in 1940, is headquartered in Chicago.

Pricewaterhouse Cooper is an audit and assurance, consulting and tax services firm.

UPS is based in Atlanta.

Deloitte is an audit, consulting, tax and advisory services company.

Its logo is mostly seen on credit cards. Visa is a multinational financial services corporation based in Foster City, Calif.

A subsidiary of CVS Health, CVS Caremark is a prescription benefit management company. CVS (CVS) is headquartered in Woonsocket, R.I.